Skip to content
Nothing helps sell the players on the notion of the dungeon as a place of pure, seething chaos like a good altar of evil, expect maybe TWO altars of evil.
Finding fifteens in the local FLGS (that aren’t remaindered Flames of War remnants) represents one of those fun challenges that true gamers embrace.  This little altar for instance, allegedly scaled for the big 28mm figures, offers a chance of three different pieces for my preferred fifteens. 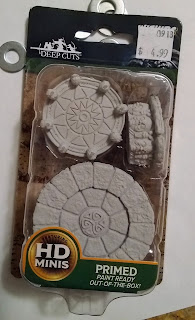 Of which I took two.  For permanence, the base and top have been joined permanently, creating a sort of summoning circle.  The round altar pillar has a convenient bit of stone finishing on top, making the pedestal a perfect height and look for a dark altar graven with ghastly visages and pressed with the bones of its victims.  Yeah, the skulls on the dais are a little oversized, but that can be chalked up to either stone carven skulls, or the skulls of giants, depending on the DMs mood and inclination.  The latter – ten giants killed to create the dais – has wide ranging implications perfect for your chief, jarl, or king’s local steading, rift, or hall.

The pre-primer on these resin pieces didn’t work out so well.  The red basecoat, done to provide a hint of eldritch and bloody mortar joining the stones, took several coats to reslly stick.  Next time I will prime coat Wiz-Kid’s ‘preprimed’ figures for better and more consistent coverage. 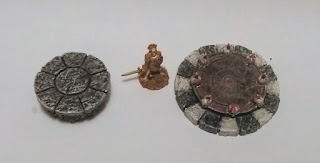