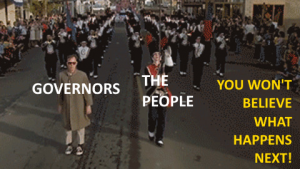 In the next week or two we can expect to enjoy a glut of governors racing to get ahead of the population.

Forget what charts and graphs and polls you see on the television. Those have all been carefully crafted to tell you what the powers that be want you to think.  Instead, take a look at the world around you.  People are getting back outside.  The roads are filling up.  The stores are getting crowded.  As is our way, a few loud Americans are generating solid visuals for the media’s stories, but most of us are just slipping out the door for a walk or a quick shop or a visit to family who have been too long alone.

We’ll see more scares, and more data, and more fake news whipping up fear and hysteria, but we’re on the downhill slope of this crisis.  The people have spoken, and the Governors who want to maintain the kayfabe that they command and the people obey will have to scramble to deliver edicts “allowing” what is already being done.

Here in Hawaii, we’ve already had one false-start.  An announcement that the shopping malls would be allowed to re-open was rescinded the next day with the explanation that the memo was not slated for release just yet.  They only prepared it so that it would be ready when the time came, and no they had no idea when that might occur.  This from the same governor’s office that issued a false missile threat that paralyzed and terrified the entire island.  Very reassuring.

The legal fallout should be fun to watch.

There will be a lot of lawsuits coming up in the latter half of the year, as we scramble to decide months after the fact, exactly how far the government can go in the defense against bioweapons.  Unemployment might be skyrocketing, but the lawyers are going to make out just fine.  Funny how it always works that way, innit?