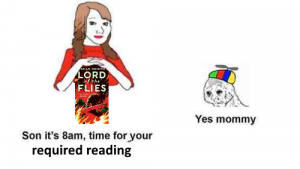 Like all American boys, I was reliably informed by people who should have known better that The Lord of the Flies was an important book that had important things to day and that asked important questions.  Like all normal American boys, after reading it, the only question that I had was, “What the hell is wrong with adults?”  Even at their worst, the boys I knew were better than those portrayed in the novel.

Thank God for my parents, both of whom were surprised I read this book on my own recognizance.  Both of them when confronted told me in more subtle 1980-speak that I had made a mistake and they didn’t get the hype for the book either.

As is so often the case when it comes to Fake News, reality has a much more hopeful version of what would happen if a group of boys were stranded on an island for months before rescue.  Recently, The Guardian (!) ran a story on a real-life experience that provides a useful corrective to the hateful abuse-porn of William Golding.  This being the Grauniad, they have to offer a pinch of incense to Ceasar by connecting Lord of the Flies to the Jewish Holocaust in order to make excuses for Golding’s shriveled little soul and the sorry excuse for adults who propped him up.  With that bit of danegeld paid, the author goes on to relate his own story and the lengths to which he had to go to track down the real world example of a group of young castaways:

One day, in 1977, six boys set out from Tonga on a fishing trip … Caught in a huge storm, the boys were shipwrecked on a deserted island. What do they do, this little tribe? They made a pact never to quarrel. 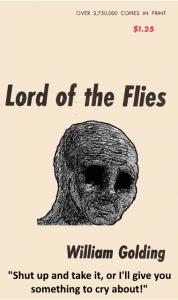 That might make for inspirational reading, but it also provides a more hopeful view of the world.  It shines a light on the innate goodness of humanity, and that’s something that the ugly-souled tastemakers who pick and choose their champions cannot allow.  The goal of post-modernists is to make th

e world as ugly as themselves.  They paint normal people with broad brushes and focus laser-like attention on the exceptions to the rule of mankind as a generous creature.  They prop up the lies and the bleakness and tell us they are wise and profound and expect us to fall in line.

And yet, even as a twelve-year old kid, their lies tasted like ash in my mouth.  As an adult, their lies look clownish.  It’s so clear when you look around you – even in the midst of the buffoonish response to CoronoaChan – that the world is not a dark and hopeless place.  There is a light that shines all around us, and from within us, and you’d have to be blind or lying to yourself not to see it.

You might think I’m being harsh, but I haven’t even rolled up my sleeves yet.  Turns out old Golding was exactly the kind of guy you would think it took to write a book like Lord of the Flies.

Again from The Guardian:

The Nobel laureate Sir William Golding, whose novel Lord of the Flies turned notions of childhood innocence on their head, admitted in private papers that he had tried to rape a 15-year-old girl during his teenage years, it emerged today.

Golding’s papers also described how he had experimented, while a teacher at a public school, with setting boys against one another…

The author’s psychological experiments with his classes at Bishop Wordsworth’s school, in Salisbury, caused his eyes “to come out like organ stops”, according to his private journal.

He divided pupils into gangs, with one attacking a prehistoric camp and the other defending it.

So yeah, it turns out Lord of the Flies was child-abuse porn written by a drunken lout of a man who, in a better age, would have been given a lot more knuckle sandwiches and a lot fewer laurels.  He was just another typical cultural ignoramus who loved tearing down fences when he didn’t know why they were built in the first place.  There’s something deeply satisfying about seeing this iconoclast, a pale stale male, getting metooed by the next generation of iconoclasts.  His works will soon be forgotten, consigned to the dustbin along with the rest of the Boomer detritus, while the works of giants with more faithful and Faith Full approaches to story survive and are revered.

So too with those sorry people who push books like Lord of the Flies are Grima Wormtongues.  They deserve the same fate.  Kicked out of the halls of power, and left to beg for scraps.

Thank God for Tolkien and Chesterton and Lewis, whose works provide far more enriching fare for the Men of the West.