Over the last decade the internet has collectively decided that any holiday celebrated by Christians or Americans should be marked with lots of snarky condescension and derision of the celebration.  In that spirit, let’s take this Bastille Day to remember that the birth of the French Republic was accompanied by a bloody afterbirth in which the Jacobins slaughtered over 100,000 loyal subjects of the King.  Fought in 1793, when the results of that bloody insurrection against Good King Louis were still somewhat in doubt, this chapter seldom makes the history books – at least hear in these United States where the French Republic receives credit for backing the American Revolution rather than the blame for revolting in protest of the pricetag incurred by the Good King for his support of our own revolution.  One of the supreme ironies of the modern narrative of history is that the man most responsible for the American Republic surviving it’s match against the British Throne should be so forgotten and indeed, vilified, in our history books.

Anyway, the patriotic residents of the Vendee didn’t trust the dirty rebellion in Paris, nor the moneyed interests that drove the action there, and rallied to the King’s Flag.  Over the latter half of 1793 – and here we should pause to note that by this time The Terror was in full effect – the rural citizens of the French Kingdom saw the writing on the wall and took up arms to defend themselves and their property, and that of their beloved Church, from the  rapacious Black Jacobins.  From Infogalactic:

Persecution of the clergy and of the faithful was the first trigger of the rebellion; the second being conscription. Nonjuring priests were exiled or imprisoned and women on their way to Mass were beaten in the streets.  Religious orders were suppressed and Church property confiscated.  On 3 March 1793, virtually all the churches were ordered closed.  Soldiers confiscated sacramental vessels and the people were forbidden to place crosses on graves.  Nearly all the purchasers of church land were bourgeois; very few peasants benefited from the sales.
The March 1793 conscription requiring Vendeans to fill their district’s quota of the national total of 300,000 enraged the populace,[9] who took up arms instead as “The Catholic Army”, “Royal” being added later, and fought for “above all the reopening of their parish churches with their former priests.”

Attacking the Churches?  That sounds familiar.

Within a few weeks the rebel forces had formed a substantial, if ill-equipped, army, the Royal and Catholic Army, supported by two thousand irregular cavalry and a few captured artillery pieces. The main force of the rebels operated on a much smaller scale, using guerilla tactics, supported by the insurgents’ unparalleled local knowledge and the good-will of the people.

With the decisive Battle of Savenay (December 1793) came formal orders for forced evacuation; also, a ‘scorched earth policy was initiated: farms were destroyed, crops and forests burned and villages razed. There were many reported atrocities and a campaign of mass killing universally targeted at residents of the Vendée regardless of combatant status, political affiliation, age or gender. One specific target were the woman of the region. Since they were seen, in a way, that they were carrying anti-revolutionary babies, they were seen as primary targets.

From January to May 1794, 20,000 to 50,000 Vendean civilians were massacred by the Infernal columns of the general Louis Marie Turreau.

They don’t teach you that in History class.  And since these are big numbers, let’s just put a nice tidy bow on things to illustrate how bloody the Revolutionaries were: 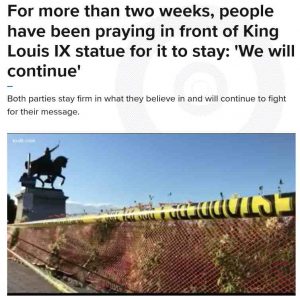 It is a strange thing for a son of the American Revolution to cheer so heartily at the deposing of a King, particularly one as helpful to their cause as Louis XVI.  And yet, as a student of History one cannot help but conclude that the Bad Guys won that bloody revolution.  One also can’t help but notice how the upper crust led a revolt by the underclass against the King and the middle-class in that once proud nation, and draw significant parallels between then and there and here and now.  Deeper reading than my teachers would have liked has led me down a path that questions the very foundation of my own nation.  While the American Revolution saw considerably less genocidal actions, the resultant Republic of the upper-middle class, by the upper-middle class, and for the upper-middle class needs must force an upper-lower class gentleman to scratch his head and think some very dangerous thoughts indeed.

If Kings were really so bad as our history texts makes out, why did the replacements of so many of them gleefully rack up body counts that would have made all but the most Mongolian of monarchs blush?  Could it be that the Papal warnings about a certain secret society of stonecutting men, active at the hearts of both revolutions, were more prophetic than the stonecutter approved history books admit?

Difficult questions for difficult times.  History is turning into a phase shrouded in red-misted uncertainty.  We shall be asking these questions and reading and studying them in the hopes that we can come out of the Crazy Years with a better appreciation of what worked best in history – for all mankind and not just the Mandarin class – and perhaps recapture some of that early American magic.  If that requires a King rather than a Senate…so be it.

For now, I stand with Saint King Louis IX.  Godspeed on your journey to defend the Great King, citizens of St. Louis, MO.  Know that you have allies and support from faithful Americans from sea to shining sea and beyond.