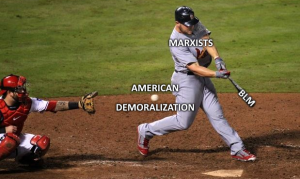 Not going to lie: there were a few days there when Milwaukee was still burning that things got real tense.  The anti-bad people had their run of things, and even successfully declared independence from these United States.  (At least a few square blocks of them did.)  Mayors huddled in their bunkers and crossed fingers that they wouldn’t have to deal with the situation. It felt like the long knives were out, the megacorporate slaves to GloboHomo were protrated (again), and people were taking notes of who posted black squares and who did not.

And yet, the storm has passed.

Oh, it’s still raining, to be sure.  The fight is not yet won – it may never be possible to win a fight against a cancer such as the one we face – but the worst of it has passed.  Those responsible for the devastation are being held accountable, and more importantly, the American mockery machine is in full effect. 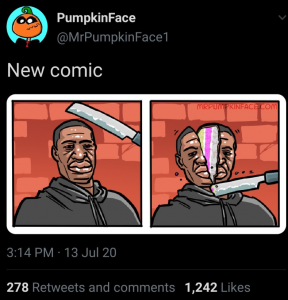 I don’t understand the above comic.  It has something to do with a viral video where innocuous objects were cut open to reveal them to have been cake all along.  The running joke among people who are bad at humor is that everything might be made of cake.  Humor shortcuts for the humor impaired.  Apparently the one thing that must not be suspected of actualyl being filled with cake is the martyr to Marxism, Saint George Kirby.  It’s not a very vicious or even a funny joke – everyone knows George was full of fenanyl rather than cake.  Yet it somehow managed the neat trick of sending a host of the Death Cult into paroxyms of rage so deep they could not even communicate WHY the comic was offensive.  It was merely assumed to be so, and even questioning the offensive nature of the comic put one on the crimethink side of the ledger.  In other words: the usual.

Except that PumpkinFace boldly asserted that free speech lives on, and that not even Saint George, Terror of Pregnant Women, was untouchable.

It’s okay to laugh.  Our opponents are clowns.  They spin and tumble and gyrate according to ever shifting winds, hoping to stay one pinch ahead of the rest of the crabs in the bucket.  They deserve so much worse than mockery, but if this is the only weapon we have, then we shall wield it while we may.  Let them fact-check us until they are blue in the checks.  Nobody liked the hall monitor – they are only inflicting further damage to themselves.

On a more practical note, and one considerably less amusing, the unassailable position of the BLM Movement itself has begun to show a considerable amount of crack.  No pun intended. Take a look at the headlines, and the amount of flak being thrown at the organization’s leadership is impressive. We’ll have to wait and see if the surrender monkeys on the right follow through with any of these threats, but even the signal – that the whole organization deserves the descriptor “domoestic terrorists” – kicks the Overton Window way the heck over to the side of the good, the beautiful, and the true. A man can freely dissociate himself with the simple truism, “I don’t support them because I don’t support domestic terrorists.” That is a sea change worthy of note. It puts the onus on the questioner to defend the actions of those who shoot children, steal prodigiously, and burn neighborhoods to the ground.  Those who withdraw support are no longer under attack, but forcing the terrorists to make that hard sale.

We’re not done with this fight, but things are looking a lot better these days.

And don’t discount the quiet tide – the silent hordes who say nothing until they enter the voting booth.

Their voices will be thunderous this November.