They’ll never let us go back to our normal lives.

Not because of “the science” but because of the egos.  The technocrats have too much invested in their own sense of self-worth to ever admit that they botched the entire Summer of CoronaChan.  They can’t walk back any of their disproven predictions.  They can’t scale back on their dire warnings.  They can’t let you see the pertinent data.  They can’t even do actual science because that might shatter the illusion that they’ve had a handle on things and everything would have been fine if those pesky citizens had just accepted every demand of the technocrats without complaint.

I am here to tell you that nobody knows what’s going on.  Not really.  We just don’t have the data to say with any certainty.

At the heart of science and the scientific method is the notion “all other things being equal”.  When you run an experiment to determine how different stimulus or inputs affect a system, you have to try and hold steady as many other variables as possible.  If a lot of things are changing from one run to the next, you have a very difficult time understanding which change brought about the changing outputs of the experiment.  With the science of CoronaChan, nothing is ever held equal. 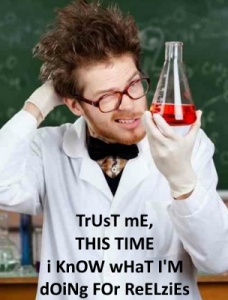 State health departments vary how they report cases.  The testing rate varies from month to month and state to state.  The classification of deaths (‘died OF ChineseSuperAIDS’ versus ‘died FROM ChinaSuperAIDS’) changes from month to month and state to state and sometimes individual deaths are re-classified months later according to the whims of the policy makers.  There was no control group.  Not a single predictive model has been calibrated against real-world data – and if it has, the data was carefully massaged using climate change level jiggery to fit the model.  It’s  all guesswork, conjecture, and crossed fingers.

Now, to be sure, you can SOMETIMES use advanced statistical methodology to “smooth out” a variable here or there and isolate the one variable for which you are testing.  That can be a valuable tool in limited circumstances, of which a major pandemic is not one.  The only way to drill down to the real effects of CoronaChan you have to account for so many variables and build so many “smoothing curves” and “balancing factors” into your analysis that what you wind up owes more toward kabbalah and examining chicken entrails than it does experimental science.

Build a complicated enough model, talk fast using jargon-heavy language while wearing a lab coat, and flatter your audience that they are smart enough to agree with you, and you can convince a lot of mid-level IQ people that you know what you’re talking about.  Bonus points if you tell your audience what they want to hear.  For example, “protesting for lawlessness prevents the spread, and protesting for law enforcement or going to church spreads the virus”.  A lot of people believe that the novel corona virus has a heart of gold and some mechanism by which it recognizes why potential hosts are rubbing elbows and sharing breathing space.  They believe that, and they believe they are good at ‘the sciencing’.

They trust their programmers who have fed them a tidy little suite of “if-then” loops to keep them compliant.  And thanks to the social pressure they exert, we’ll have to eat in our cars like savages instead of at a table like civilized people forever.  We’ll have to ear face t-shirts that block the sun’s healthy vitamin-d benefits while serving as much use blocking the virus as a screen door blocking water from entering a submarine.  All that comes from Mandarins in white coats who fear a loss of face far more than they fear getting the wrong answer.

Call them what you want, what they do isn’t motivated by a pursuit of the truth.

Now take a look at this scary curve from the CDC, that Oaffish-ul source of all things sacred and data: 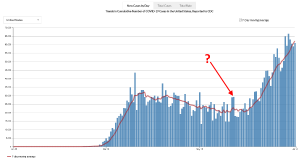 The red arrow clearly demonstrates that George Floyd was the one thing holding back the tide of cases.  Two weeks following his death that curve leaps upward.  That’s the level of scientific discourse we engage in now.  But that’s neither here nor there, the important thing to note is that ‘cases’ is an ill-defined and hence scientifically useless term.  Even more important is that the CDC makes it very easy to find static numbers, and even easier to find the scary charts.  Any chart that might demonstrate that our fears are unfounded get shuffled to the back of the bus.  The easy pull down menus don’t include total deaths, or death rate, or recovery rates.  For that, you have to go to google, which at least gives you the option to look at cases and deaths: 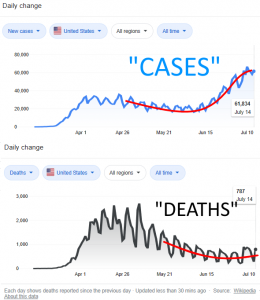 Apparently Governor Cuomo killed off all the easy targets already, because I’m seeing a big increase in the trend of people surviving a kiss from CoronaChan.

Anyway, I’m not a doctor or epidemiologist.  I’m just a humble scientist who collects data and uses it to understand how best to protect human health and the environment from the inevitable industrial “whoopsies” that occur in any complicated system.  I’m not here to tell you how to live your life, except to encourage you to doubt everything you hear from official sources, and to take comfort in the fact that things are getting better all over.  Stop worrying so much, and get back to living.

That, living well and living happy, is the best way to get revenge on the people who hate you, and who want to use science as a weapon to hurt you.