Things are getting a little hot out there in internet land, and in the interests of self-preservation, I have adopted a policy of speaking circ 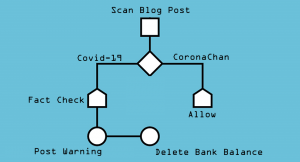 umspectly.  If you read my last post, you’ll notice that it never directly references the ‘Vid Nineteen.  Nor does this one.  It doesn’t need to.  You’re smart enough to read between the lines.

With that in mind, let’s talk about the men who cut big rocks into small blocks.  The men who were present at the founding of the American experiment and who were smart enough to throw together a cease-fire between Christian denominations that held a nation together until 1964.  Of course we are talking about those sons of the Enlightenment who petulantly shouted, “Screw you, Dad!” to the One, Holy, and Apostolic Church, to found a new religion dedicated to reason, equality, and chopping off the heads of Catholics everywhere.  For years, I’ve accepted the common wisdom that the organization in question was a harmless collection of guys scooting around parade routes in funny little cars while wearing funny little hats.  As with so much of the modern world, the more I learn about them, the more I doubt everything I thought I knew.  And making note of where all their halls stand.  You know, just in case.

Yeah, I’m still on my French Revolutionaries were the bad guys kick, and after listening to some inspiring songs that were sung by Team Good, came across this little gem: 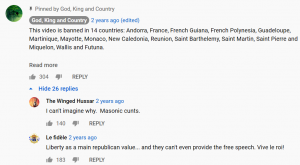 Free speech for me, but not for thee.  Sound familiar?  How about a little more joggin for your noggin:

They are losing the War on Noticing, and it has them doubling-down on practices long performed in the shadows.

The Great Silencing is not a new phenomenon.  They have been practicing it for many long years.  The problem is that 2020, the year of clear vision, has exposed a lot more of who is behind the curtain than those wizards ever wanted.  Now they are upping the silencing game, and it gets easier and easier to realize what is happening here.

They are all children of the same devil.

We may have to fight it as a guerilla war, against our natural inclinations, but we are smart and cunning.

We’re going to win this fight.