Skip to content
Not a lot to say here.  I snatched a bunch of screencaps from recent videos posted up at the YouTube channel, Joy of Wargaming.  Full battle reports are available there.  For those who lack the patience for such things, here’s a brief rundown of the action so far, with plenty of photos for your entertainment and inspiration.
We’re using Void Pirates for these, with a heavy dose of Five Parsecs for inspiration.
The crew of the Blackraven, led by Cobalt-15 are hot on the trail of a magic space baby.  If they can deliver it to Big Guv, their spotty records will be swept clean.  In the second battle, they have to search a small psychic isolationist dwarf compound for on L. Ron Sluggard, a missionary from the Discordian Church seeking to convert the dwarves away from Space Thor. 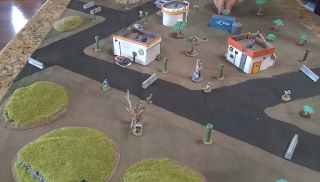 Marion hacks an ATM and discovers that L. Ron Sluggard is in the building to the left, which forces a smash-and-grab on the part of the party’s Shootist.

The psychic dwarves were unable to do much to stop the crew who escaped without injury. 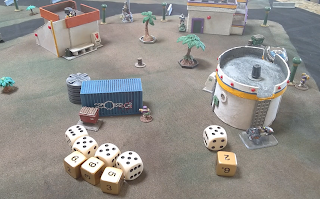 Bracing the man, he tells them that they need to hit up a Shrineworld and seek the location of the magic space baby within an oracular woods. 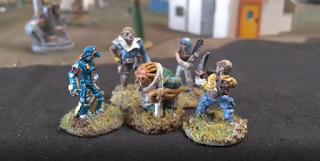 He didn’t tell them about the feral yelizard guardians… 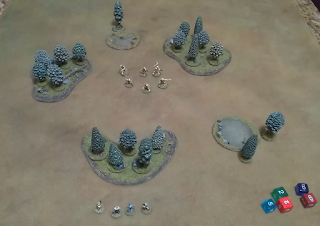 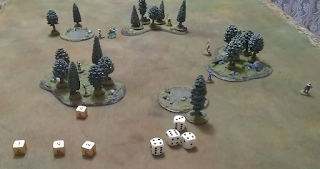 Leaving Marion to abscond with the information gleaned from the shrine and the menfolk nursing a variety of wounds.

Little does Cobalt-15 know, Marion could not resist the temptation to ask the shrine about something more important than some magic space baby – she now knows the location of her One True Love!

Hey, don’t look at me!  Blame Nordic Weasel, it was their character creation charts that rolled up Marion’s motivation as “Looking for Love in All the Orbital Places”.

Next up, the crew returns to L. Ron Sluggard’s house to get him the business for sending them on a wild goose chase.  But nothing is ever easy in this fallen universe, and they have to beat a band of slavers to the punch if they want to squeeze another red herring out of the fat bastard. 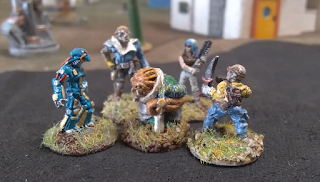 Things are getting a little more complicated than your average wargame campaign, and that’s just the way we like it around Chez Abox.