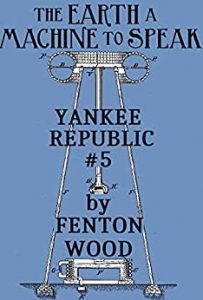 Fenton Woods The Earth a Machine to Speak, falls into the mega-engineering porn category because (one of) the central threads of the novel is an effort to spit-roast the earth from pode to anti-pode, make one pole of the spit-roast a five-mile length of copper rocketed into the atmosphere, and then consume the thing by using it as the sending antennae for a transmitter capable of producing an interstellar signal.  But first said transmitter has to be built from a 60-ton chunk of supersteel buried beneath the largest city in North America that starts the book in the form of a massive train engine.  Oh, and they have to sneak the 60-ton monster out of the city, onto a boat, and across a rapidly freezing over North Atlantic before the sea-route closes up on them.

Everything in the book hinges on the kind of super-science that would sound flimsy if it wasn’t for the super-engineering details that support it.

The result is a throwback to the best of the silver age of science fiction.  It’s a perfect marriage of the engineering touch of Heinlein’s juveniles with the human touch of Ray Bradbury.  It’s the love of space Heinlein brought to the genre welded to the love of Americana that Bradbury delivered.