There’s a couple of fresh new outrages going on in the drama llama club that is mainstream sci-fi.  Somebody tried to publish a magazine that didn’t prostrate itself before the cult of Nu and got cancelled.  Again.  And something about Lovecraft.  Again. 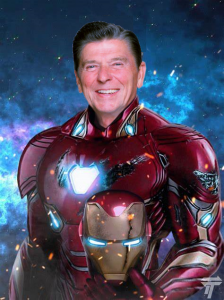 Rather than talk about that, why don’t we talk about some of the good stuff happening beneath the fold.  Way out here in the wilds of independent publishing, you can find some truly creative and novel…uh, novels.

I am a good writer.

Ronald Reagan’s Brilliant Bullet just hit the Amazon stand, and the good Mr. Heimbach was kind enough to send me an advance reader copy so I can confirm it is even better than his previous work, The Devil’s Dictum, which was great.  But where  The Devil’s Dictum painted a dark and dreary alternate America beset by plagues and pirates and politicians,  Ronald Reagan’s Brillian Bullet features a far brighter alternate America in which the reader can spend a little time.  The basic plot is that, in the mid-80s, Ronald Reagan decides to take an Ironman style super-suit for a test spin and becomes the superhero America deserves.  Oh, and he does it inside the laboratory hidden beneath Roosevelt’s stone face at Mount Rushmore because where else would you do something like that?  Then he goes off and fights the evil Deep State that has been plaguing his administration.

Yeah.  You wouldn’t even get this through the door of the stodgy schoolmarms in NYC publishing houses.

Granted, that is a concept that would be a total cringefest in the wrong hands.  But Frederick Geno Heimbach manages to infuse the tale with enough human touches to make it feel real.  The jokes are organic and structural, and rather than inspiring a cold hearted guffaw, they warm the heart of old Americans who recognize so much of their youth and the way they once saw the 1980s in this work.  The satire is oddly subtle and background scenery to a fun adventure story – not the whole purpose of the book.  That’s a refreshing change from the usual political and historical satire that dominates the market these days.

Ronald Reagan’s Brilliant Bullet is funny, irreverent, and it targets all the wrong people.  It’s masculine adventure featuring the devil from their worst nightmare as an aggressive paladin, and it’s great.  They wouldn’t even know what genre to put this book into, and for that I can forgive them.  I don’t know what genre it falls under.  Funny adventure satire? Comic sci-fi cape stuff? A right leaning alt-history love letter?

Whatever it is, it’s great.  Give it a shot.