Skip to content
You can’t take to the streets when you don’t have any streets to which to take.  Before we can play the most cutting-edge and modern of wargames, Riot: From Watt Tyler to Watts we have to build a city worth peacefully burning to the ground.  Here’s my quick and dirty and oh-so-effective way of whipping up a modular city perfect for modern, organically grown love-ins and the dastardly forces of peace and prosperity who oppose them.  Or vice-versa. 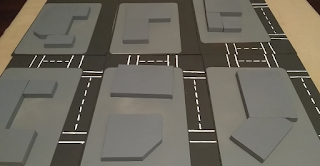 Masonite boards, cut to fit the transport box, painted black.  Layer up the curbs with matte board painted gray, then cut 1/2-inch thick lumber in a variety of sizes. A gray primer makes for a fine base coat.  Don’t worry about the gray-on-gray.  It won’t last long.
Note that I’ll leave the tops gray – I’ve cut the z-axis of the board off at one story because the additional levels of the city won’t factor into the game.  Not at the scale of conflict that we are modelling here.  This also allows for better access to the inner streets.  Maybe not suitable for mecha fights or big stompy monsters, but it works for what we’re doing here. 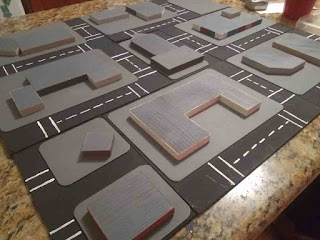 Even just a quick painting of the walls of this city adds some variety to the proceedings.  You could almost play the game right now, but we’re all about the visual appeal here, so we have a lot of work to do yet.  The buildings are dry fit for now – they need to have the walls fully painted and detailed, and some steps and curbs added, before the final fixation.

With a few blocks painted, and a bit of curbing in place, this city is already starting to feel safe enough to attack.  For my part, I eschew real-world politics and real world companies, preferring a more light-hearted touch.

For example, in my city the big grocery chain is the Saferway.  Just like the original, only safer!  The building in the background was supposed to be a police station, but it didn’t turn out as obvious as I’d hoped.  I need to figure out a few little details to add to really sell the idea. 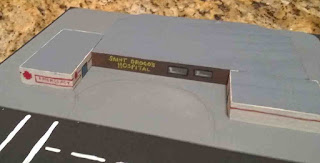 And Saint Drogo was the Patron saint of ugly people.  Seems fitting given the patchouli-scented losers who will be targetting this place with molotoc cocktails. 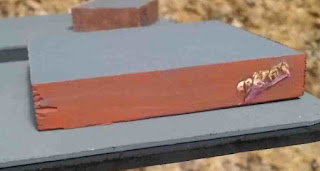 You know, the sort of people who think nothing of spray-painting graffitti onto any flat surface that goes unwatched for ten minutes? 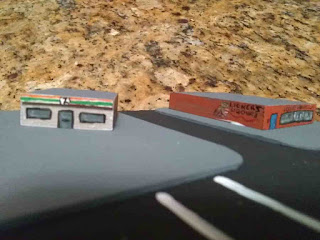 This little convenience store still needs some gas pumps out front.  But I’m pretty pleased with the booze-shop across the way.  Licker’s Liquors, serving Raccoon City the finest in alcoholic beverages since 1964.