This skirmish set somewhere in the middle of the French bocage flips the script from the first. 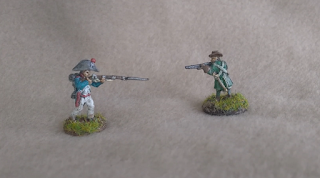 The Vendeeans, specifically the Pere Corbeaux and his three sturdy sons, all veterans of the American War of Independence and glad to return to La Belle Vendee to escape such revolutionary escapades, find themselves the first line of defense for their little village.

Pere Corbeaux is Rank 4, and each of his sons Rank 3.  The Blues are represented by a Rank 4 leader with six mooks of Rank 2.  In game terms its an even match at 115 to 116 points.

In scenario terms its a blood bath.  Les Corbeaux had a scout take up sniper position among the rocks to the left of the road, and settled quickly into the woods and behind the stone field wall in the upper right corner. 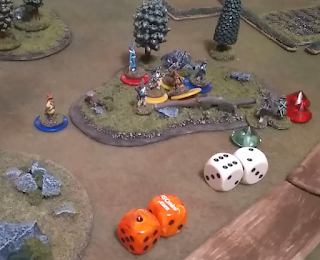 Once again the Vendeeans turned back the revolutionary guards.  Once again they paid a high price, with Pere Corbeaux succumbing to his wounds.