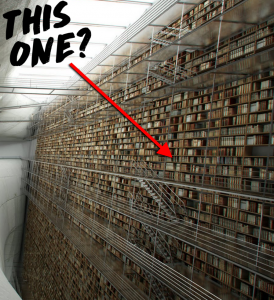 Sure, there may be a pretty hefty list of really important books in the fantasy genre.  Books like Starship Troopers, Lord of the Rings, and Harrison Bergeron should be on everybody’s reading list, but the genre is big.

You just won’t believe how vastly, hugely, mind-bogglingly big it is. I mean, you may think you’ve read a lot of fantasy books, but however many you’ve read that’s just peanuts to the genre as a whole.

That’s one of the beauties of the genre – the sheer scale of it all means that one can read and read and read until the cows come home and still barely have scratched the surface.  And yet (aside from a few artificial lines in the literary sand that help market dark fantasy and LitRPG and science fiction and sword and sandal and so on until you hit the Zeno’s paradox of splitting genres) it is possible to read enough works to get your arms around the genre to the point that you can consider yourself well versed in it.

Another fine feature of the genre is that it is self-referential enough that once you’ve read fifty or so odd novels, you’ve got a pretty good idea of what to expect while still leaving plenty of space in your assumptions for surprises between every front and back cover.

A reader of fantasy should endeavor to read both wide and deep, to be sure.   Hence, a reader who has read 100 classic titles but missed a few of the biggest names isn’t necessarily a poser.  A guy who skipped Tolkien but has read all the works of the Immortal REH and a tenth of the copious output of MegaBoss and OG blockbuster author Eddie Rice Burroughs and a smattering of Dune and Homerand Glen Cook and Lieber and maybe even Anderson and modern drek like Gaiman, Abercrombie, and Rape Rape Martin would have enough of a grasp on the genre to hold his own.

Which is not to say that all works carry equal weight.  A reader whose massive back catalog includes ‘A Handmaids Fail‘ and ‘A Snoozefest of Earthsea‘ and a hundred YA fantasy books written after 1980 sounds more like a poser than a fan.  Or the kind of lazy faker that wants all the pride of place of having her books on the shelf next to a grand-master like John Buchan or George MacDonald without mucking about learning anything but the bare-bones muddied tinkering of a Clarion workshop.

And also, any psychopath that does this to her bookshelf?

Never read Lord of the Rings?  Eh, read Pohl Anderson, you’ll be fine.  Don’t like Heinlein?  Grab any three Larry Niven books.  Dune too much for you?  The John Carter series will give you all the same white savior feelz.  You can work your way around any given hole in your reading.

What is essential is an intense desire to know more – a curiosity about the past and a willingness to pick up books from the masters, both old and new.  Any books.  From the loftiest of epics to the bloodiest thunderers, a true fan of doesn’t turn up his nose at the writers who built the many-roomed mansion of fantasy in favor of the latest cause célèbre and TITLE OFFICALLY APPROVED BY NYC PEDOPHILES AND NEPOTISTS.

A few odd holes in one’s back catalog doesn’t mean a thrusting out into the Void.