The big hoopty for 2020 here at Chez Inabox has been the move to integrate 2mm scale gaming into the mix.  Not only that, but we determined that a move into the new frontier of mass battle black powder gaming was in order.  We like to zig when the world zags, and we rarely go in half-way.  Five full armies and a few scattered allies await five players.

But all those piles of teeny-tiny soldiers need some ground to battle over, and now we’ve just about got it.  Here’s a shot of some excellent Irregular and PicoArmor terrain for you, primed and ready for some color. 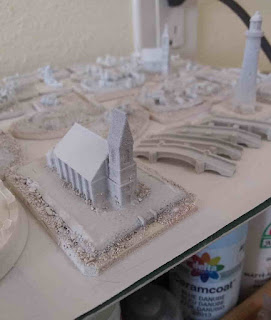 Just getting the vegetation done adds a lot to the visual appeal, n’est pas? 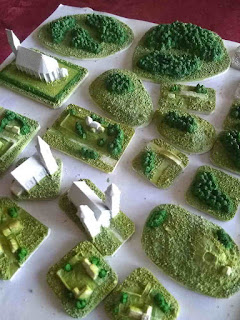 And to give you a better idea how tall the little hills are, here is a WIP unit of Imperial or Militia infantry ready to storm the slopes.

One of the decision points on a project like this comes when you have to decide exactly how to account for the base thickness.  The massive 25+mm figs tower enough that it doesn’t really factor in at all.  When your boys are only as tall as the base itself, it forces a wargamer to think.  Should the terrain have a base just as thick as the units?  I’ve decided to do just that.  It makes the table look a little more ‘gamey’ and a little less ‘living diorama’, but the game comes first.  This will help establish that border between ‘open ground’ and ‘special circumstance’ and prevent it from looking like all the armies are hovering well above the rest of the terrain demarcations.