The much maligned second season of True Detective (SPOILER ALERT) makes for better watching than you’ve probably heard.  The critics and the masses loved the first season and demanded more of the same, but different.  They got it, and complained heavily about a sophomore slump.  While it is true that this season isn’t as good as the first, it remains a gripping watch for those with the eyes to see.

A quick rundown of the plot goes like this: a well connected politician is killed.  Three distinct and crooked law enforcement agencies and a crime gang leader all want to control the investigation.  Whodunnit is secondary – the important thing is that the right person get the blame for it, and that the investigation reveals the corruption in THE OTHER GUYS.  The resultant tangle dredges up old crimes, new gangs, and a lot of soul-searching on the part of the three broken cops and the gangster that just wants to go legit.

It’s all hard delivered with a slow pace and unclear goals for anyone involved, but the murder investigation and politics are secondary to the personal journeys the three cops and the gangster go through.  How they extricate themselves from the mess of their lives takes the center stage, and it works in the same manner as Season One.  There’s just a whole lot more of it.

The cinematography is great, the dialogue fun, and the performances stellar across the board.  Honestly, though, Season Two had three major stumbling blocks for most viewers:

All of which are valid observations, but only for those who aren’t willing to put in the effort to enjoy the show that it demands.  These are warnings, not complaints, because all three of these things are compliments.

The first issue might be the worst.  Without a sympathetic murder victim and a crazed serial killer on the loose, the show lacks a solid hook.  The convoluted conspiracies that take three-quarters of the show to understand distract from the broken souls that drive the action.  It’s the difference between being spoon fed and taking long, slow, deliberate bites. This show requires more patience and more attention to detail than most viewers and all critics possess. 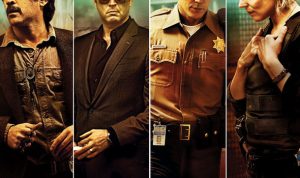 The second problem, that the characters start off despicable, creates a high bar for entry.  Pizzolatto doesn’t give us a whole lot of reason to care what happens to these four protagonists and every reason to turn away from their struggles.  From the sounds of things most people did just that, and didn’t wait around for the mid-season turning point when they all realize that the real investigation was the desire for justice they found along the way.  That sounds corny, but it’s a one sentence summation of some of the best gradual soul-searching and final decisions to do the right thing in the end that TV has ever shown.  It’s natural, and organic, and it takes time for those seeds of decency to grow into full bloom, but when they do…it’s heroic in a way you rarely see these days.

Another aspect of the redemption arc is that this is an ugly watch.  It takes place in LA, and it shows LA-noir as the grimy and crowded skinsuit of paradise that it really is, not as the shiny and glamorous and cleanly corrupt LA-noir shown in films like L.A. Confidential  or Under the Silver Lake.  People in this show are unkempt, sweaty, greasy, exhausted, and on their best days still struggle to maintain a veneer of glitz.  It’s not a big thing, but it helps to drive the seediness of the plot, and it an

d the muted palette make for an unpleasant viewing experience.  This is an ugly show, and when they come, those rare moments of true beauty shine all the brighter for it.

Worst of all, the show tackles fatherhood issues in a sensitive and compassionate manner.  Unlike the cheap and tawdry JJ Abrams one-note of a son struggling to come to grips with his father’s disappointment in him, this show looks at things from the point of view of a father.  It’s a rare thing to see come out of Hollywood – like the show itself a rare diamond amid a whole lot of coal – and for that alone this show is worth the price of admission.  Men struggle to understand their sons.  They long to fight the good fight for their sons, knowing the whole while that they can’t.  They try to make amends for long-past mistakes.  They risk everything for a moment of peace and understanding.  It’s impressive, it’s sad, and it is wonderful.

And ninety-nine percent of the people writing about media today find all this talk of fathers as human beings so tedious and mind-numbing they can not even with it.

Which is the best explanation for the show’s lack of success among the general populace.  They literally cannot appreciate what this show does so differently from any other.

It’s a shame, because it is a damn fine show that will stick with the serious viewer for a long time after watching it.

It’s almost as good as the original, and that is some high praise indeed.