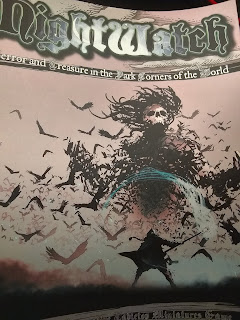 So I ordered a copy of this based on the recommendation of a viewer over on the channel, Justo Perez, and it’s been a real struggle to read.

Not because of what’s in it, but because life is hammering away at me with reckless abandon.  Not sure why, but every time I grab this book there’s an emergency that drags my attention away.  Very strange.
And disappointing, because there’s some real potential in this book.  It’s a smallish skirmish game that looks designed to be played by a single player.  You would think that could be said most skirmish games, but we live in strange times.
You’ll take two to four heroes, each of which has stats a bit less complicated than what you’d find in a Warhammer Quest style game.  They look to be more on par with what you see in Frostgrave, which is nice because you can also plug in a handful of less powerful and hence less-complex allies.
Then you’ve got to handle the hordes of enemies, whose stats are (mostly) single dice.  The bigger named entities stand out with more actions and more special rules that complicate matters, but it still doesn’t look unmanageable for a single player.
We’ll have to play through a game or two to know for sure.
For now, I really like what I see.  It’s specific where it needs to be specific, vague where it needs to be vague, and just open-ended enough to allow for some exploration.  And how about that tagline?

In a grimdark world where everyone is falling all over themselves to wonder who are the real bad guys, where Disney keeps trying to explain that witches are cool, actually, and literal satanic pedophiles exercise global power, it’s nice to find a game that admits…
It’s the monsters.
Monsters are bad guys.
Go kill them.
More to follow after this game meets the tabletop.
2 Comments
Making Adventure Fiction Great Again
Subscribe today to be first to hear about my new release, plus receive a copy of a free fantasy novella!
Follow