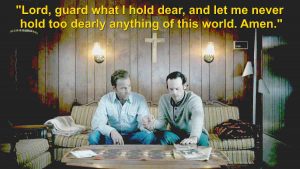 Most of Hollywood’s offerings are dismissive affairs, driven in part by a desire to hack away at the roots of Western Civilization.

And then you have True Detective.

The third season features one of the most profoundly pro-Christian messages ever shown on TV.

One of the threads that runs through the show is the disastrous effect the kidnapping and murder of two young children have on their parents.  One falls completely apart.  One rises above and finds new meaning.  There are subtle intricacies at play here that you have to watch to understand.  There are acknowledgements of ideas that don’t normally make it through the gauntlet of woke-censors at the networks.  That’s all you need to know – this show breaks taboos put in place by the modernists.

And it features a ruined man putting his life back together, finding the strength to march on, and finding that strength in the Lord.  Near the midpoint of its run, Season Three takes a long and lingering few moments to offer up a prayer of strength and thanksgiving with all the respect due to such a moment.  It’s done with compassion and respect, and comes completely out of the blue.

It might just be the biggest surprise of the show.