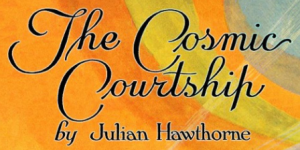 P. Alexander, the man behind Cirsova Magazine, one of the best of the new breed of independent short fiction magazine and now one of the longest running, is something of an explorer of lost realms.  Through his friendship with Michael Tierney, author of the Wild Stars Collection, he has managed to turn up another lost classic.  Despite the best efforts of a generation of incompetent English literature instructors we all know the name Nathanial Hawthorne – he of the dreary anti-Puritan screeds dressed up as classic literature.  Turns out his son’s version of “screw you, Dad!” involves writing rebellious stories of action, romance, and adventure out beyond the grip of Earth’s gravity.

Julian Hawthorne’s The Cosmic Courtship might have been lost, buried as so much of the great pulp structures were, beneath the tangles and vines of a literary culture that turned away from heroism and making the universe a better place.  Hacking away the overgrowth with the machete of his keen editorial eye, Alexander found a unique opportunity to share something lost and wonderful with the rest of the world.  Tell me this space-sorcery doesn’t sound fun and rewarding and I’ll tell you that you are at the wrong blog:

Mary Faust, a brilliant scientist, has developed a machine that can allow the conscious human soul to explore the cosmos! Her promising young assistant Miriam Mayne has accidentally transferred her consciousness to Saturn, where she falls under the enchantment of an evil sorcerer! Jack Paladin, her love, sets out after her on a thrilling celestial journey to the ringed planet! Swashbuckling adventure and high romance await in Julian Hawthorne’s The Cosmic Courtship!

This work has only ever seen print one time – as an anthology in the early twentieth-century must-read magazine All Story Weekly.

Sure, it’s already funded, but it’s pretty close to reaching the stretch goal of opening this great tale up to Project Gutenberg.  You can help be a part of preserving this lost treasure for future generations of space-fantasy fans, and at a cost of just ten bucks for the paperback, you can add a copy to your own personal bookshelf.