Welcome to plus-ultra mega-elite modern day wargaming where we feature stories ripped from the headlines.  Which naturally means stories that are as fake as the Piltdown Man.

To do that we’ll need some modern terrain (working on it), some rules (Osprey’s Black Ops), and a matched pair of forces.

In one corner, weighing in at several trillion dollars and dressed all in black, we have the SWAT forces dedicated to protecting the Modernist World Order:

In the other corner, weighing in at a couple hundred bucks and a few thousand rounds of ammo, we have this ragtag band of *ahem* Freedom Fighters. 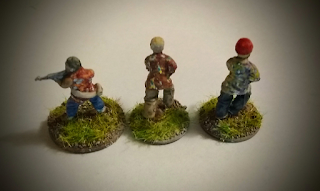 Looks like a gross mis-match.  Let’s go down to the sidelines and see what our roving analysts have to say about the coming game.  Take it away, Minh and Walid!