What can I say? I’m a sucker for a good infiltration mission.  Here, the crew of a tramp freighter have snuck into Starport Moai to re-clone a couple of forcibly infected crewmembers.  This looks like a job for Gold Cross.  Not even an mRNA scrambler shot of nano-trackers can survive the cooking up of a full-blown clone. 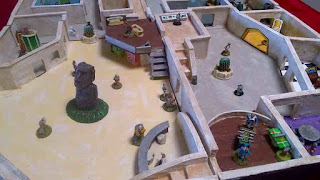 Here, the crew of the Blackraven have to sneak two crew-members from the front door, into the Gold Cross franchise, and make their getaway before the alarm is sounded. 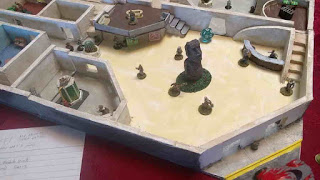 Spoiler alert: They don’t make it. 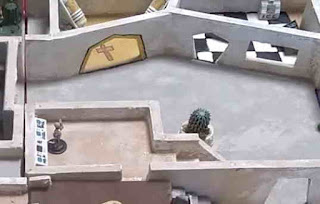 The guy watching the camera feeds (lower left, above) was not fooled by Marion’s hack for quite long enough.  Once the jig was up, he managed to race back to the main office and alert the guards, who promptly set out to stop the crew from making good their escape.

Here’s one more shot, in the moments before the storm broke.  In the end, the alarm was raised too late.  Not early enough to leave the crew unscathed, but too late to stop them.  The sole injury was a wounded arm, and Lt. Dayne losing his favorite blast rifle.  All in all, not a bad trade to keep the crew healthy and untrackable.

You can watch the full action here: