Skip to content
Oh, those lovable, roly-poly weirdo beardo dwarves.  Always delving too deep.  That’s what the ladies say about them, anyway.  Over on The Channel we kicked off a second campaign of Patrick Todoroff’s “Nightwatch” with an easy mission to cleanse the desert of the plague of nasties that have been, er plaguing it. 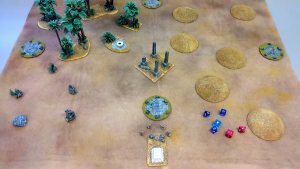 Our four heroes have sworn a vow to retake the homeland or die trying, and even pledged the first 60 sp worth of loot to finance the economic rebuilding of the old place once they clear out the squatters.  The names of our heroes (Jonal, Gav, Arthru, and Bob) were swiped from the commentors, and all fit the theme of slow and steady.  They are heavily armored, but a bit plodding as they trudge their way to glory. 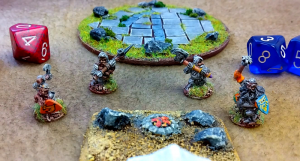 Yeah, we use dollar store plastics for monsters in our games.  We are old-school, and tend to sneer at those who think spending money is the same thing as playing the game. There are more people out there with that mentality than you think. 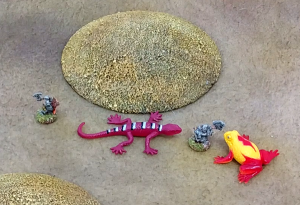 Two bucks for fifteen miniatures that work great in scale isn’t just frugal, it’s smart.  Bright and cheery, these reptiles are still fearsome and menacing once you put them into the proper context. 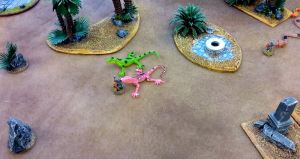 In “Nightwatch” your AI-driven enemies spawn every turn from one of four randomly chosen points.  In my first campaign, I struggled to remember which point was which, so for this go-round, I made it easy.  I whipped up some quick stone circles with ruined tiles that have the spawn number right there on the board.  When you’re running solo, every little reminder like this frees up processing power for the rules of the game, and I think the little tiles look smashing on the table, too. 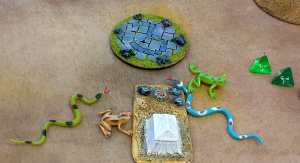