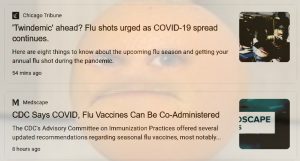 Just as Big Pharma begins to run up against the limits of what profit they can wring out of mandated Nuremburg Violations, they discover that the flu is still a thing after all.

So Big Pharma gets their annual injection of cash, and now they can roll multiple compounds into one.

Even better, now that the barrier between law and bodily autonomy has been broken, they can set about mandating every man, woman, and child submit to “it’s just a flu shot, bro”.  Expect that narrative to kick off by the end of the year.  They’d do it now, but they need time to gin up some graphs with red lines that go in bad directions.

Before we go further, here’s an important thing to remember – you don’t have a burden to prove that what Big Pharma is selling is toxic.  The burden rests on them.  The and their lackeys at the CDC have to prove to YOUR satisfaction that these things are safe.  And incongruous narratives only raise that bar higher for anyone paying attention.

Recall that the story from last year went something like this: muh Rona outcompeted the normal flu.  If you think you had the flu, you had the Rona.

Which means the story from this year must go something like this: the regular flu found a way around muh Rona and brand new flu variants are immune to the Rona, but they are not immune to the regular vaccines because they didn’t change that much and it’s complicated baby.

Okay, pal.  Whatever you say.  The answer is still no.

Let’s take a look at the scary flu increase that drove the headlines in the image that kicked off this post. I’ve take these numbers from the Center for the Ministry of Disease Truth itself.  You can play around with this data yourself, for now.  First up, the charts of flu rates over the course of the 2019-2020 flu season.  Note how the numbers crater two months before the mask mandates went into effect.  Very cool how the masks were powerful enough for their effects to ripple backwards in time.  No wonder we have to keep wearing them.  The longer we wear them, the further back in time they’ll kill the Rona.  If we wear the masks forever, the Rona will never be born! 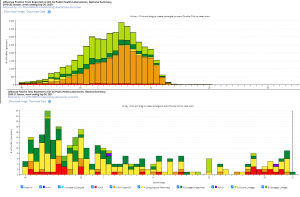 Anyway, here’s the same two charts with the vertical axis normalized.  For those of you with bad vision, that horizontal line between the chart and the legend is this year’s flu numbers.  Very scary that increase of a kajillion percent.  Flu numbers went up an infinite number of times already, and we’re barely into the flu season. 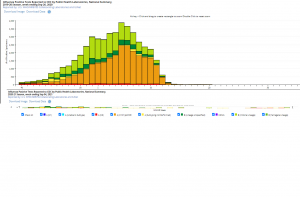 War is peace.  Lies are truth. Baby murder is health care. And you’re getting fat because I refuse to go on a diet.