Skip to content
Back in the day, at the height of the Cold War, cloak and dagger battles were deadly earnest affairs, with only the rare example of a Get Smart to lighten the mood.  Today is no different, with the added frisson of a clandestine asymmetric war waged by entrenched forces against a beleaguered and largely leaderless resistance.  Into such weighty matters and ray of humor must shine, and here we have my tongue-in-cheek campaign wherein the forces of CONTROL and KAOS are played by Hapless Control Freaks and a Well Meaning but Poorly Led Herd of Cats.  You can decide which is which for yourself.
Here, we have the Black Hats infiltrating a small, rural airport on the hunt for Very Important Financial records that take the form of rare Pokemon cards.  Black Ops involves more status tokens on the board than I really like, but they speed play and I’m less inclined to obsess over “visual appeal is everything” than in my younger years. 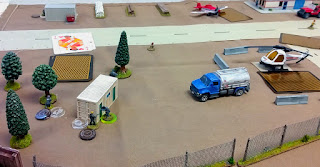 The leader of the Black Hats, Very Special Agent Ray Getard, takes aim at an airport guard from the corner of a field office.  The resin terrain came from GameCraft Miniatures and they offer a set of three different models for $16.00.  Not a bad price for the kind of terrain you can drop into a variety of settings.  They work for everything from 1950s Africa through modern, post-apocalypse, and well into the future. 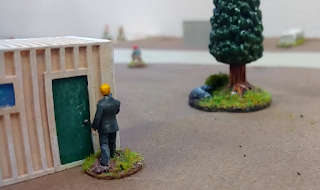 And here’s a group shot of our plucky resistance.  The guy in the cowboy hat is charismatic leader Ron Wildcard, and for the first time in a short stealth-campaign, he has managed to get his hands on not just an RPG, but a guy who knows how to use it without blowing off his own head. 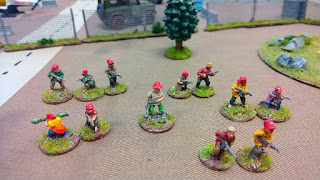 The campaign has really helped maintain my interest in this ruleset, which I’ve discussed at length elsewhere.  Just good stuff, man.