Let’s take a moment to bask in the majesty of this self-own. 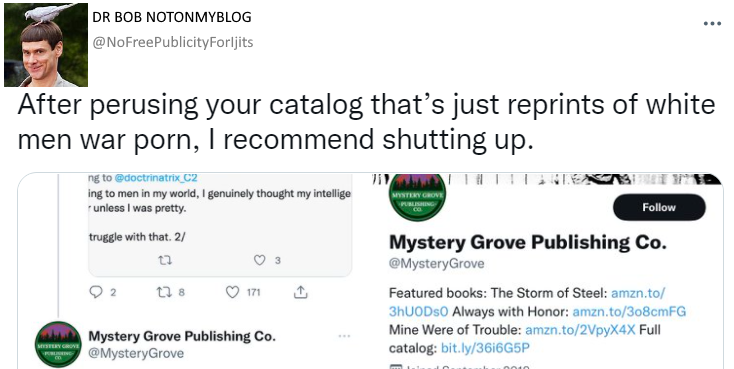 It, and the conclusion of my Year of Dumarest, was a great motivation to finally get off my duff and knock a couple titles off my ‘to-read’ pile.  The two in question?  Earnst Junger’s Storm of Steel and Peter Kemp’s Mine Were of Trouble.

In the case of the former, I specifically chose the original 1929 translation from Mystery Grove because it’s the one that the gets the blue-hair brigade riled up the most.  In the case of the latter, hey – Mystery Grove runs an entertaining twitter feed and that’s the best marketing of all.  That site is a helluva mosh pit, and you gotta respect anyone who can jump in and throw bodies around like they do.  It’s worth buying from them even if you don’t read the books, just as a financial thank you for all the laughs.

For those new to the genre of white man war porn, Junger’s book is a diary of his experiences dodging shrapnel in World War One, and Kemp’s is a diary his experiences dodging commie bullets in the Spanish Civil War.  They are both great reads by hard and thoughtful men hardened by their time in the crucible of war.  Junger’s is more patriotic, as he fights for his homeland for reasons that are vague to him, and Kemp’s more idealistic as he fights against the poisonous forces of communism.  In his own way Kemp fights for his homeland as well, though on foreign soil.  Recognizing, as all men of wisdom do, that the infection of communism is best fought before it takes root in your homeland, because it will always seek out new hosts to infect and destroy.

Reading these novels back to back is a powerful experience, as Junger’s fight results in a loss that strengthens international communism and Kemp’s fight results in a win that weakens that wrecker of nations.  Knowing the history of the two conflicts neither book allows for much suspense, but in these cases the journey is the point rather than the destination.  We know both live, else they wouldn’t have been around the pen the forwards to these books.  Yet taking the time to walk a few miles in their muddy and bloody boots really helps to inform the reader of the nature of war in general and these two conflicts in particular.

And that is, naturally, the most damning part about these books in the eyes of those who long for adoption of national gangrene that goes by the name communism.  The protagonists of each of these books do two thing very well – they are good men and relatable and they express the full range of doubts about the what and how of their job without ever expressing the slightest doubts about the why.   They know who and what they are fighting for, even as they admit that the conflicts owe a great deal to the shenanigans of what we euphemistically describe today as ‘international bankers’.  That the behind-the-scenes-puppeteers have arranged for these conflicts for their own global interests in no way diminishes the need and just motivation of the men forced to fight these conflicts for own local interests.

What these men provide is clarity in the midst of the fog of war.  Where they fought a war of bullet and blade, today we muddd through a war of information.  On the one side we have mainstream media outlets who thrive in the smoky shadows of words without meaning and poltical goals that dare not speak their own name.  On the other side are outfits like Mystery Grove who fan away the fog to provide clear guidance and clear examples of men who saw further than others, and who returned from the hellish mouth of war to teach and inspire us all to have faith and courage.  No wonder men without chests like Dr. Bob recoil in disgust at such works.

For my part, both novels suffer a bit from ‘and then and then and then’ syndrome.  Junger relates a long series of battles in which his lottery ticket number rarely comes up and when it does it takes the form of a survivable wound.  He acknowledges the role luck plays in his survival, admirably so, and more so than most of his modern-day boosters do.  Both authors, as lucky survivors against terrible odds, run through a string of side characters that come and go with each passing page.  For his part, Kemp is the better at painting broad characterizations in a line or two, and as a warrior in a shorter and more dynamic war his account of the Spanish Civil War moves along at a much faster clip than the static trench warfare Junger describes.

That’s not necessarily a criticism of either work.  The repetitive and sometimes tedious nature of certain passages followed by short, sharp descriptions of combat perfectly suits the pacing of the books.  The distinction between those two vastly different phases of war-fighting mimics the life of a front-line warrior and reinforces the experience for the reader.

For my part, Kemp’s book proved more engaging as it added a great deal of depth and honesty to a conflict that is given short-shrift in today’s culture.  He provides a much clearer look at the roots of the conflict and specifically how important the moral level of war is to everyone involved.  That’s not a lesson the opponents of international communism are supposed to learn until after they are kneeling against a wall in a cold dark place.  The good guys won this one, and yet still the history was written by the losers because even as they lost on the field of battle, the losers managed to win the moral level of the war.  As a record of turning victory into defeat alone, this book is worth the read, and why bad guys like Dr. Bob actively discourage anyone from reading it.  The taste-makers don’t much like talking about their losses unless it is to shift the blame for their evils onto the shoulders of the victors hey this is a good time to look at Picasso’s Guernica.

Both books are not just engaging reads. They are important reads.

And we’re lucky to have an outfit like Mystery Grove around to preserve them in the face of such reckless hate.