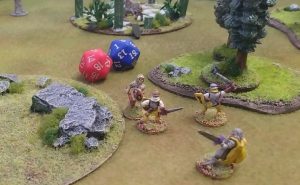 Late last year I finally got around to ordering a couple of titles from the Wiley Games lineup. Having missed out on the hardback omnibus fantasy project, and curious about how Jay Wiley handles procedural, by which I mean random table generated, dungeon generation, my first foray was always going to be in the fantasy genre.

To my great surprise, Wiley games sent me a box with a number of other titles, the tape measure, a couple of decks of cards, and is if that isn’t enough, status tokens. Such a generous gesture deserves some extra attention, so my Chainmail 2022 has morphed into a Wiley Games 2022. We will still be looking at the classic of the genre, but it won’t be this old focus of this year’s deep delve into miniature wargaming. 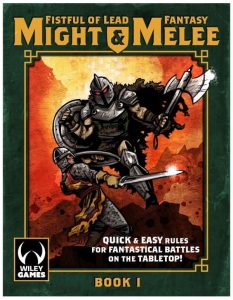 The first of three titles in the fantasy line, ‘Might and Magic’ provides the basic framework of the game rules.  Presented in full color, all three books feature some wonderful art which generally takes the form of well-staged shots of very well painted miniatures, from a variety of manufacturers. It is really nice to see those plastic Citadel orcs again. Especially side by side with more modern fair. You don’t often see such a mix of the old and the new, it works really well.

But in the general framework, ‘Might and Melee’ is geared more towards medieval war gaming. There are no spells. There are no monsters. There are just hard buds in regular armor wielding regular weapons. You could use this title for everything stretching from late medieval all the way back to ancients, and probably cavemen too.  The following books ‘Magic and Mages’ and ‘Monsters and Mazes’, adding the fantasy flavor, and we’ll talk about those later.

Today we’re just going to talk about the basic, genre neutral rules. And they flow really well. The activation system uses a regular deck of cards. Each player is dealt one card per model, which they look at, don’t show the opponents, and keep in their hand. Each turn is played in a series of rounds, the GM will call out ‘Kings’, and any player with a King can use it to activate a figure. When those are done you step down through the ranks of cards. Aces are wild and can be used as any individual card, giving the player a little more flexibility. To add to the fun some cards have special abilities. When you activate a model using the queen of hearts, for instance, that model can stand up heals a wound, and then takes it’s normal action.  Sixes will give a model A free reload, which normally takes an action. And the deuces allow the model to roll two dice on an action, and pick the better of the two. So a patient model gets an added boost to his skill. This is a really effective system that will allow games to move along at a steady clip while keeping all players involved, even if you have as many as eight players.  That alone is an impressive achievement, keeping that many people entertained consistently over the course of 3 to 4 hours is no small feat. 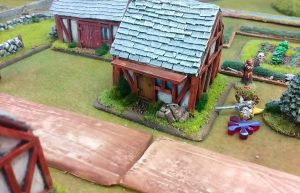 Combat consists of opposed rules, with the difference in combat scores affecting the results of a wound check. The more you beat your opponent by, the more likely you are to wound him or put him out of action.  In contrast to that, missile fire is a role against a toughness number which is modified by the usual conditions – skill, cover, range, and if you’re lucky, a boost from the card that activated the figure.  Finally, if the wounded figure has armor he can make a saving throw which if successful, will reduce the effect of the wound.

The combat sections are pretty standard fare as far as miniature wargaming goes.  That’s not a criticism. Sometimes game designers out clever themselves. Will try to pack too much innovation to a single rule set, and it all collapses under itself. Here the gamer is faced with the prospect of comfort food. Something familiar and easy, which is important because of one added wrinkle that you don’t often see. And that wrinkle is shock. In addition to wounds of figure can suffer shock, which degrades his ability to move his ability to fight, and his ability to recover.  The dual status markers, shock and wounds, can quickly add up.  It is an interesting mechanic, and one I haven’t fully come to grips with yet. There are ramifications to this that are subtle, interesting to work out, without adding a tremendous amount of complexity to the game.

All of this might seem like a lot to track, and it is, but the game makes it far easier than it should be. The use of status tokens and a deck of cards and you’re measuring device and your dice might seem like a lot of logistics. But each of these devices simplifies the task that the gamer has in hand, and the synthesis of all of them is done in a way that feels natural and organic. It doesn’t feel like clutter. It doesn’t feel like subsystem after subsystem. It all feels like part of a seamless whole. The last aspect we should talk about is game balance. Fundamentally the game balance is itself by limiting each player to five models, one leader, one second in command, and three grunts.  Each class of figure has a number of traits and the number of equipment slots, as you might expect, leaders have more of both. This leads to a situation where, on paper, each player’s Force has the same number of abilities as the other guys. However, some traits and weapons stack in more effective ways than others. It is hard to say whether two quote equal forces unquote are balanced, and ‘Fistful of Lead’ doesn’t even try. That’s pretty smart, if you ask me. Any attempt to balance a game like this is doomed to failure. Adding the complicating factors of terrain and scenario objectives, and it is a Herculean task best left to the players themselves. With a limited number of traits available there isn’t a whole lot of min-maxing that you can do, and the policing of such behavior is best left to the table rather than the designer. Play the game is intended, build your forces organically, and you shouldn’t have a problem. 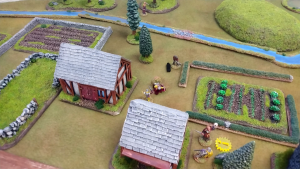 In the final analysis I’m very glad I picked up this title for small battles between limited numbers of forces, it does everything that a skirmish game should do, and provides a level of tactical complexity that is well out of proportion to the effort acquired to play the game.  I can’t wait to give the black powder version of these rules a try. They work so well for fantastic and medieval warfare, it will be interesting to see how they work with limited armor options, longer reload times, and well-armed cavalry.