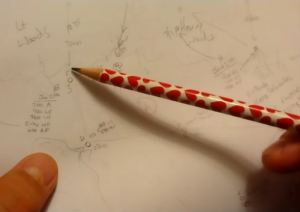 I’m in the process of filming my third extensive war game campaign using William Sylvester’s excellent “Solo Wargaming Guide”, and let me tell you, the process really gets the noggin jogging. Particularly at a time such as ours, when armies are on the march, and pencil-necked warriors declare themselves experts on what should have been done, what should be done, and what will be done.

As an aside, whilst many in the hobby begin wringing their hands over wargaming as a pasttime in a time if war, I remain convinced that at times such as this, wargaming becomes even more important. As the old saying goes, if you want peace, prepare for war.

Miniature wargaming, fantasy or historical or sci-fi, can provide insights into the realities and complexities and challenges of conflict. And with greater understanding comes greater wisdom, and with greater wisdom comes a greater ability to find the often camouflaged path to peace. Besides, most of the guys who profess worries over wargaming in a time of war have no genuine intention to put their hobby on pause. They are merely engaging in that time old tradition of empty virtue signaling, and as such, are not to be trusted.

My fantasy war campaign represents a loose affiliation of orcish clans set against a unified human confraternity. Before the first dog of war is loosed, the set up and conduct of this campaign result from the culmination of a million small choices. And yet, more often than not, these choices are illusory.  In a great many cases, the choices offered are between the sensible thing to do or the utterly ridiculous thing to do.  Does a general use his army to seize a strategically important choke point such as a or a crossroads, or a family farm out in the middle of nowhere? That is a choice, but the answer is blindingly obvious. The decision to protect the crossroads rather than a nameless farm directs the flow of the conflict. After the bodies are laid to rest, and the peace treaties are signed, and the poindexters begin to write thier histories, they sell them see how little choice a general had in the matter. How much more so to see how a million little decisions contribute, when the guns are blazing?

Even the wisest of us cannot see all of the ramifications of our actions.

So too in the real world.

On the flip side, the natural order lends its weight to the issue of inevitability. Men can only move so quickly. Those farthest from the front line may not be available when needed. The vagaries of geography play a role. Rivers and mountains and swamps all play traffic cop to the march of armies. Technology restricts how quickly things move about. These important limitations put handcuffs on generals and political leaders. They limit options in unforeseeable and often forgotten ways.

So too in the real world.

Which leads to an odd dichotomy as one looks at conflicts around the world.

In some part, they are a result of choices made in the past, whose decision makers could not have anticipated that they would lead to this fell end. And in some part they are the result of the natural order, but little distinguishable from inevitable.

The natural order of things put those conflicts in motion.  Yet the seeds of all of those wars were planted by men who would be dead generations before the shooting began.

On one level, this moral of the story, “it’s not that simple”, is trite.

Yet, as one looks across the vast wasteland of modern media, whether social or otherwise, one can’t help but be struck by how few recognize that try little axiom.

Try to do better than the people you see on TV.