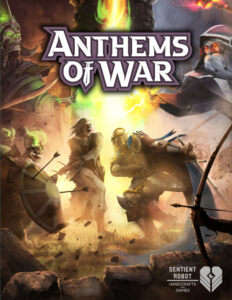 Ryan Dunfee of Sentient Robot Games just released Anthems of War, a fantasy skirmish miniature wargame with much to recommend it.

He was kind enough to ask me to whip up a couple of videos on the game, and by way of thanks sent me both the PDF and a hard-copy of the game.  You can expect and introduction and my usual cack-handed first attempt at playing a new game on camera to hit the Joy of Wargaming in the coming days.  That makes me one of those ‘influencers’ you read so much about these days.

Having given the book a (not entirely thorough) read through and played the introductory scenario has given me the confidence to talk about it here and around the digital water cooler. As far as independent titles go, this thing looks professional.  The art is a 50/50 mix of blank and white generic fantasy line art (it’s fine) and exquisite shots of the author’s collection of figures.  The layout is clean and easy on the eyes, too – no busy textures hovering beneath the text to confound the eyes of the grognards.

It uses a clean and streamlined action-reaction system to keep both players fully engaged, and pairs that with an order system that lets commanders do whatever they want, but never enough of it.  You get one order for each figure, plus an extra or two if you have a solid commander or some other trait, and spend the orders to activate one figure at a time.

The difference with this game is that the actions available to figures are clearly designated, and cleanly designed to keep the interrupt actions from halting the flow of the game.  The trick with this game is that you don’t automatically get to counter-attack in melee – you have to spend an action to do that, and even then, you attack at a disadvantage.  Which opens the door to an interesting dynamic where the best response to melee might be to take a defensive stance. 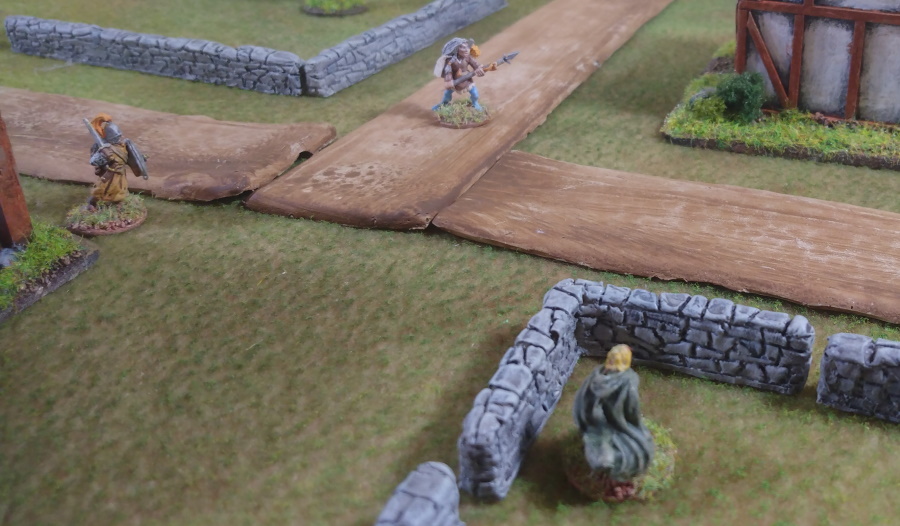 Meanwhile, since you only get as many orders as figures, you probably don’t want to spend them all at once.  If you give one order to each figure, then when play kicks over to your opponent, you won’t have any orders in your pool to react to his activations.  Which puts you in a constant state of balancing which figure to activate now, and how many orders to with-hold ‘just in case’.

The combat and morale systems are standard fare, which is a blessing in a game like this.  You’ve got enough to handle just operating the order system, and extreme innovation on the melee/morale fronts would detract from the rest of the game.

As you might expect, the game includes the usual fare such as army lists, spell lists, and a brief campaign system.  The scenarios included range from the standard line up and fight to some fairly intricate zone control missions.  As I’ve said before, scenarios are a window to the designer’s intention – they tell you exactly what sort of game he expects you to play.  In this case it is mid-sized skirmishes of five to ten figures on a smallish board, with plenty of scope for choosing your battles within the scenario.  Your games should not devolve into a middle of the table scrum, because there is alwauys something else going on out on the periphery of the table, too.

Give it a look.  It’s a handsome game and a tight design.  Maybe a little too complicated for my preferred solo style, but it looks like it would really sing as a two-player game.