Woah, that’s a lot of hits my One Page Dungeon post generated this week. Hello to all you Campaignwiki people. 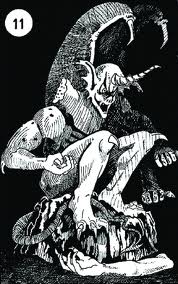 It looks like this blog is slowly morphing from a miniature wargame blog into an old-school D&D blog.  Even to the point that my post titles directly tie in to high school memories of old edition modules.  Skip the italics here if you ever plan on running through S1 – Tomb of Horrors, or don’t, it’s been so long I’m probably remembering it wrong anyway.

So we had penetrated this far into Acererak’s Tomb.  A dead end but for this mysterious statue.  Somebody gets the bright idea to put a few gems in the three hands of the statue.  Kr-r-runch!  The gems are turned to powder.  “Do it again,” I tell the party skinflint.  Three more gems. Kr-r-runch!

“Obviously this means something, do it again,” I tell the party skinflint. At this point I just wanted to see how much money he’d throw away onthe gem crushing statue.  Never found out though, after something like 5,000 gold worth of gems, a magic seeing-eye crystal appeared in the broken arm on the floor.  In a way I was disappointed.  We probably could have talked him into parting with another 10,000 gold before he gave up.

So if you’re not into the whole D&D thing, or the meandering tales and ‘show prep’ of a middle aged sad sack dungeon master don’t interest you, check back once in a while for the minatures.  Those aren’t going anywhere.  But we’re going to be doing some pen and paper dungeon delving.  I’m building a mega-dungeon for the boy, and you get to come along for the ride.

That’s not such a bad thing, though. After all, what is D&D but a glorified war game anyway?  There’s plenty of overlap between the two, and the one should keep my ADD from distracting me from my AD&D. Okay,technically, it won’t keep me from my Rules Compendium 1991 update of the Cook/Moldvay rules for Basic D&D, but that joke doesn’t have the same lilt to it.