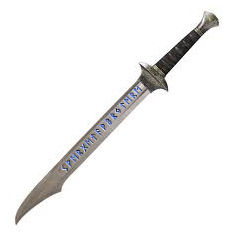 This otherwise non-descript steel sword is marked by the blue runic letters engraved along the blade as shown.  Any character who speaks the language of the northern barbarians will recognize the words from an ancient dialect that can be loosely translated as “the breaker of curses”.


In game terms, this is a +1 shortsword that also renders its wielder immune to curses of all stripes.  It cannot cure a curse that has already taken effect; all it can do is deflect the curse from a spell, trap, or anything short of a god’s whim.