As things stand I’ve got the megadungeon, one page goblin caves, and the revised Crypt of Laun Phien.  That’s two big and one little dungeon.  Not a bad start, but the players are badgering me about what’s going on between these dungeons.  Luckily, they grew up on a steady diet of video games, so once I explained the nomenclature, they8 dove right into the merits of a narrative campaign versus a sandbox campaign.  They chose the latter.

Which is fine, because Ben Robbin’s West Marches style-hex-crawl-slash sandbox campaign has snared another convert in me.  After days of letting ideas fester deep in the recesses of my lizard brain, I’ve put graphite to paper and started filling in the hexes of a wilderness.  This series of posts will detail my progress and hopefully provide some insight into the process. 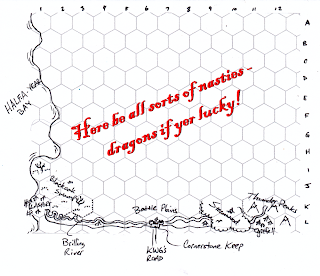 Right from the start I knew that I wanted to keep this thing manageable.  So I set a limit of 144 hexes, or an area 12 by 12.  That’s plenty big enough for a wide variety of wilderness types, but small enough for a single group to really make a dent in exploration wise.  There should be one region of each of the major terrain types.  The dungeons should vary as wildly as possible.

So here’s the background:  Cornerstone Keep used to be the central fort on the frontier between the Empire and the barbarian hordes to the north.  Over the course of centuries, the grass on the plains north of the keep was watered with the blood of countless men.  Eventually the barbarian numbers dwindled and the wars faded and the Keep fell into disuse.  Then the wilderness took over   Monsters of all stripes filtered into the areas north of the Keep and the frontier was restored.  Now the  Keep stands as a bulwark against monsters that have mostly learned better than to cross the Brillig River.  As such, it’s really more of a dumping ground for politically connected incompetents and ne’re do wells.

The players start the game with the map shown above.  It shows the end of the road (literally) and all that is known at the outset.  You can walk across three road hexes in a day or two off-road hexes, but you’ve only got a 1 in 6 chance of stumbling onto a point of interest walking across a hex.  To really explore a hex, you need to park there and spend a full day covering the ground.  This raises your chances to 5 in 6.  Still no guarantee, but at least you gave it the old Unseen University try.

Next time we’ll look at the rest of the map and how things start to fit together.