Skip to content
Pocketmunda is a side project for those times when work on the big spaceship is on hold for one reason or another.  A small table of urban terrain in the Necromunda style for 15mm gang fights.  As an easy kickstart to the terrain build, I picked up ten paper mache boxes from the local craft store for about two bucks each. The lids of the smaller boxes can be flipped over to serve as guard rails.  Probably won’t use the lids on the bigger boxes.
The beauty of these little numbers is that they nest inside each other like so: 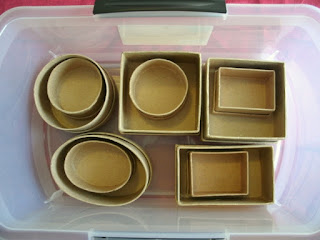 Which leaves plenty of room for dice, a ground cover cloth, CDs covered with soft cover terrain and difficult ground, and whatever odds and ends crop up during the course of construction. 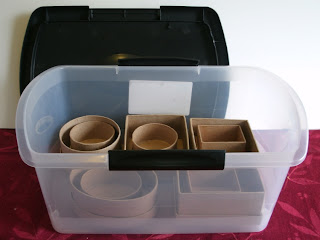 Still wrestling with the overall look of this terrain.  I know it won’t be the classic Necromunda decayed gothic and skull look.  Since my figures will all be proxies, the terrain can be whatever makes sense – or doesn’t make sense but looks pretty cool.  I’m flirting with the idea of replicating a giant cargo bay…some clever blogger put together a slick table with that theme.
Maybe a lost and buried and recently un-buried desert city on a sparsely inhabited alien planet.  That way you could keep the clean lines and softer palette, and still justify fights in uninhabited areas with lost archaeotech and what not.  It would also serve double duty if I ever decided to build up a PocketGorkaMorka game, too.  The mind boggles at the possibilities.
3 Comments
Making Adventure Fiction Great Again
Subscribe today to be first to hear about my new release, plus receive a copy of a free fantasy novella!
Follow