Skip to content
My 12 year old daughter decided she wanted in on a little bit of the Not-Romunda action, and after a bit of shopping she settled on an all girl force composed mainly of Rebel Miniatures Black Widow Mercs and Khurasan’s Gunboat Marines with a sprinkling of Laserburn adventurers.  That keeps us well away from the bondage-slash-S&M look of Necromunda, which my daughter doesn’t even know that she’s not allowed to like.
The challenge is adding a little more personality to these figures.  The MERCS are all packing pistols and the Grav Monitor crew carry future-tech-rifles.  The good news is that these two packs give us a variety of rifle armed and pistol armed ladies, all of whom wear body suits.  The challenge is that this leaves us with 12 figures carrying 2 different kinds of weapson.  Bo-ring!
This looks like a job for conversions!  Not an easy task in 15mm, but not in surmountable.  In many ways, the smaller scale makes converting easier because it limits what you can achieve, it lowers expectations, and it lets you focus more on big picture stuff without all the fiddly details.  The figures are so small the big picture items are fiddly details.  So far I’ve just done simple head and weapon swaps, but those two alone give you a wealth of options.  Here are three of them: 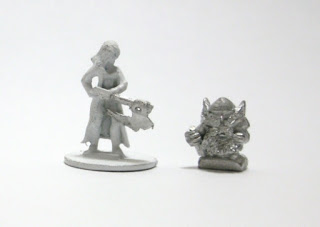 That’s a MERC with an axe cut from a 10mm Pendraken gnome adventurer. Once I trim the pistol down and round it off, it’ll look less like an axe-gun and more like a proper power-axe.  [Editors note:  After one game, I tried to do just that, and it failed miserably.  The figure looked terrible so I had to start over with a new figure.  I’ll post an update later.] 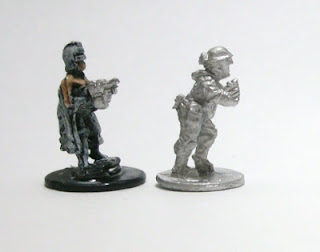 The gal on the left is a Laserburn heroine with the head of a Laserburn Law Officer.  Her pistol was trimmed off and the front replaced with the rifle and grenade launcher donated by one of GZG’s new Tomorrow’s War figures.  That’s two figures from five lines of figures from four different companies – now that’s what I call bashing some kits. 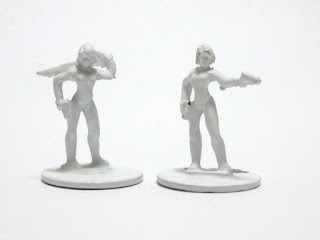 These two figures started out as identical twins. Ms. Lefty had her arm bent back and a small piece of plastic trimmed down to a vague sword shape attached.  To add even more variety, I twisted Ms. Righty’s head a little to her left.  Ten minutes of work, and now I’ve got two unique figures.
3 Comments
Making Adventure Fiction Great Again
Subscribe today to be first to hear about my new release, plus receive a copy of a free fantasy novella!
Follow