Over the last three weeks:

Despite all that, we still managed to host the boy’s birthday party today, a day long battle-fest using Full Thrust with great big ships. Most of the guests never showed up, but the three that did had a great time.
The first scenario was a straight-up slugfest in which the human fleet mauled a weaker and more aggressive bio fleet.  The highlight of the fight occurred when one selfless (or hapless, depending on who you ask) frigate dove in front of a bio-missile to save the crew of a nearby cruiser.  That decision was the key to human victory, and the next turn saw that cruiser light up multiple bio-ships like tiny suns. 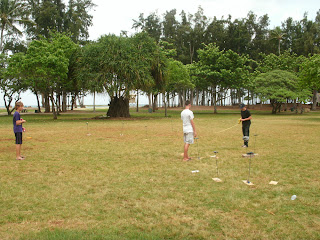 Then it was time to eat cake.  And by eat, I mean take a few polite bites and throw the rest in the trashcan, because this cake tasted even worse than it looks.
The second scenario started out as a routine race around four pylons.  Five frigates paced each other for three turns when suddenly – a mysterious cruiser class bio-ship entered normal space and proceeded to hunt down the hapless and near defenseless frigates.  One frigate put the hammer down and blasted off, trying to put as much distance between his ship and the bio-ship as possible.  (He also never lost sight of the race finish line, determined to win the race, bio-ship be damned.)
Two frigates went down to volleys from the bio-ship, and on the next turn, the human defense force scrambled onto the battlefield to hunt down the interloper.  (Meaning the players who died got new ships to control.)
The human cruiser realized the bio-ship was hunting down the lead frigate and set course accordingly:
The defense force pasted the interloper good and hard, clearing the path for the birthday boy to hit the final gate at a speed of 46 feet.