God bless the wargaming community.  They’ve come through in a pinch once again.

First, let me explain in 40k-ese: A Devil Dog is basically a Chimera with a melta-cannon and power plant in place of a squad compartment.  It fills a Fast Attack slot and serves a dual role as anti-infantry (thanks to a blast template) and light vehicles (due to a decent Strength and AP).

I’ll translate for those of you who don’t speak 40k:  This is a tank that normally costs way too much money, but can also be constructed from cereal box cardboard for less than five bucks.

Once again, this is a template you can download from the files section of the Yahoo! Group dedicated to just this sort of thing.  This is a much more complicated model than the Leman Russ seen here previously.  The body has way more than six sides, so mine wound up a bit off-kilter.  The hope is that a decent camo paint job will hide a number of sins. 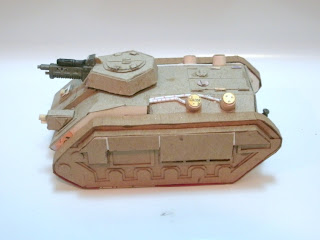 The main cannon was taken from a G.I. Joe knock-off vehicle.  It was a 50-cal pintle mounted gun, but I’ve trimmed it, flipped it, and added a second, upper barrel to trick it out as a melta-cannon. 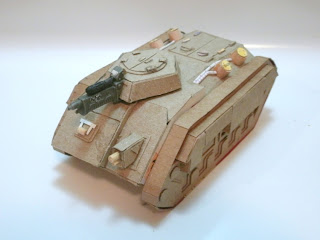 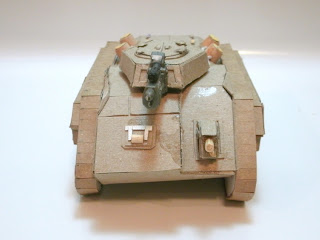 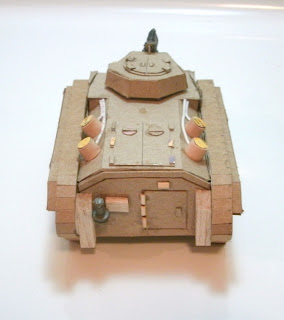