The boy and I had another opportunity to play a wargame in a way that required us to don sunscreen before rolling them bones.  Just another day in paradise.  We have enough 10mm tanks to take the Tomorrow’s War scenario Tigers by the Tail for a spin, but not the terrain.  To compensate, we drew out the battlefield in chalk on the concrete patio like so: 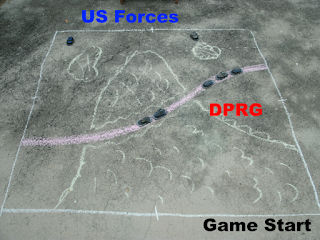 Before starting the game we ran into the first problem: What sort of woods are those?  The scenario didn’t specify.  If they are light woods they do nothing, and what’s the point of having them? If they are heavy woods, then they black movement and fire. In which case it’s a shooting gallery for the US Forces.  We decided they are light woods that prevent rapid movement and block fire after three inches.  That slows down the DPRG, but gives them ample room to maneuver while protecting them from the better guns of the USMC. 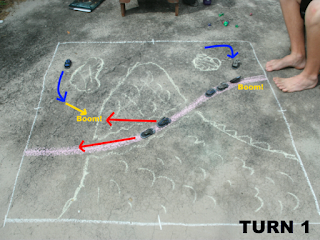 The USMC gets the initiative, moves into place, and just like that two DPRG tanks are out of action.  The DPRG couldn’t grab the reaction fast enough to get into cover, so the USMC essentially started the game with 2 of the 6 VP needed for victory.  One tank out of action and the lead tank’s main gun knocked out – this would be a pretty boring game…or would it? 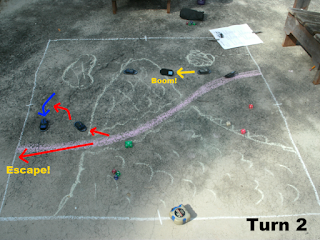 The DPRG rushes its damaged tank off the table, narrowing the victory margin, and moves the other into position to hurt the USMC with a shot up the tail pipe.  In the back half of the table, the USMC wipes out a second tank, but is too far back to catch Bai Lin’s command tank. 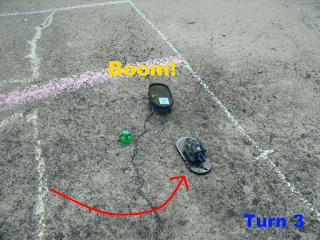 The DPRG gets greedy – rather than get off the table for 2 VP, the lead tank takes a pot shot at the weak rear armor of the USMC.  To make matters worse, the USMC rolls a one on it’s Reaction roll, triggering an off-board artillery strike that leaves it unable to move.  The DPRG gets a solid shot off and scores another VP by blowing the USMC tank to kingdom come.  With the score 4-3 in favor of the USMC, and one tank ready to move off table at the start of the next round, the game boils down to a single die roll on the right half of the table.  If the DPRG wins it’s reaction roll, it can get another tank near the board edge and behind cover, leaving no way for the USMC to hit it.

Alas, it wasn’t meant to be.  The USMC wins the roll, swats the tiger like a annoying bug, (leading to my son’s quip asking if the DPRG tanks are named after the cat or the mosquito), leaving the DPRG unable to score enough points to win the game. 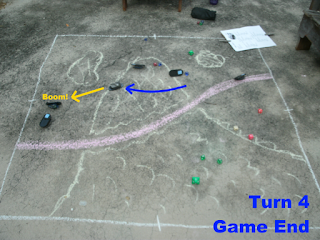 At the start of turn 4, the USMC again gets the initiative and moves up to take out the remaining DPRG tank before it can get off table.  The USMC tank has just enough movement to poke its snout out of the woods and blast the DPRG, avenging the loss of the USMC tank earlier in the game.

Final result – an 8 to 3 USMC victory.  Not a decisive win, but solid.  The game started ugly, but the DPRG fought back to make a game of it and add some drama in the mid-game, but couldn’t overcome the weak armor plating and tech level difference of the two types of tanks.

We did some things wrong in this game (we didn’t use the Buttoned Up rules at all, but that wouldn’t have made a difference to any of the Reaction rolls), and fudged some things (Ambush Alley, you’ve got to do a better job detailing terrain effects in the scenarios).  Nonetheless, a good time was had by both, and no one got sunburned, so things worked out great.

As mentioned in this blog previously, part of the fun of running these scenarios is comparing the results of your own fight to that of others.  Here are a couple of other guys that ran this for your own comparison:

If you know of any other AAR’s for this scenario, let me know and I’ll add them in.