Over a year ago, I showed you lot a map of my version of the Lost Temple of Laun Phien (link), and we finally got around to playing through it.  Last night a small but plucky crew headed out into the grasslands to explore/loot the haunted barrow mound of a long lost norseman berzerker king.  Remember them?  These are the guys chased out of the empire by the evil wizard Bargle.  They are on their way to raising an army to march back and overthrow him – overthrow him onto the sharp end of a pointy stick.

A warrior, cleric, and two elves set out from Cornerstone Keep, and after a couple days stumbled onto a band of orcs tormenting a poor wounded wolf.  They saved the wolf, now named Toby, and descended into the dark a few days later.  They scared off some skeletons, fought through traps, discovered lost libraries and laboratories, and were thoroughly confused by the ever changing nature of the caves.

[I had an egg timer set for 10 minutes – every time the bell rang, the dungeon configuration changed as discussed in the link above.  Searching for secret doors, which takes 10 minutes, the same thing happened and the timer reset.]

The kids figured out what was happening pretty quick, but they haven’t made a concerted effort to figure out the pattern just yet.  For their first foray, they were just glad to find the way out.  Here’s the map they came up with. 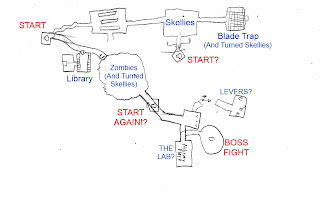 Two hours after entering the dungeon, they confronted the spirit of the norse king – a skeletal figure in horned helm who put down the warrior and cleric and wolf, before a rain of silver arrows dropped him into a burbling vat of black poisonous tar.  The plucky heroes loaded a couple of grand in gold onto their mule, Jerry, only to find that the quick walk back to the loot had once again changed.
Tired, hurt, and running low on food, they made their way back to the Keep where they fended off the queries of other would-be grave robbers, rested up, divvied up the gold, and generally prepared for the next big adventure.
Making Adventure Fiction Great Again
Subscribe today to be first to hear about my new release, plus receive a copy of a free fantasy novella!
Follow