Skip to content
To recap:  Our humble and noble Necromancer was passing innocently through a pleasant wooded glade when he was viciously accosted by a troop of inbred and illiterate ogres. 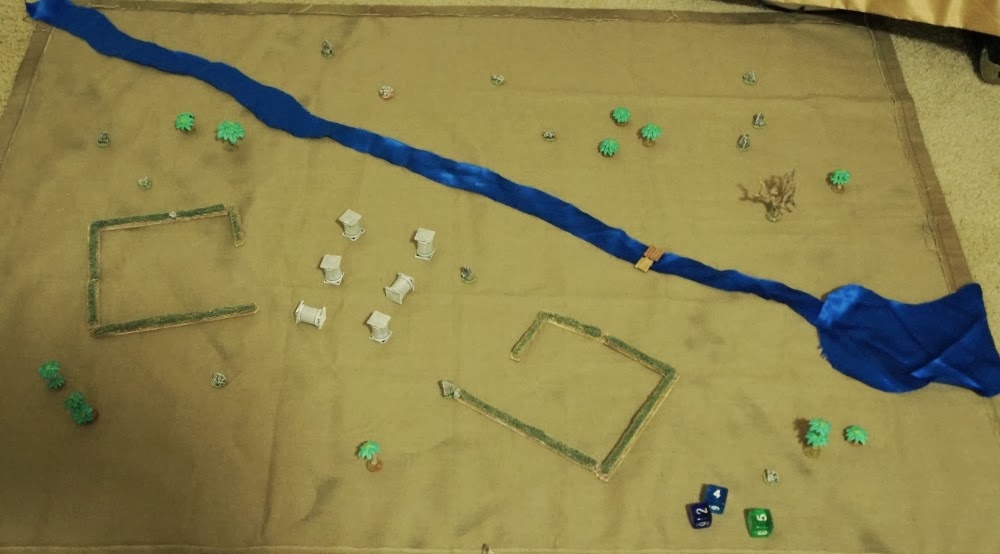 The Necromancer, his assistant, and his skeletal party were heading south through the forest as shown here. The ugly ogres and their pet troll, spotting a potential victim, immediately headed in for the kill.  Being slow and stupid, this took quite a while.  First one ogre would shamble forward, then the other.  Thanks to their bumbling ineptitude, the Necromancer had plenty of time to organize a defense. 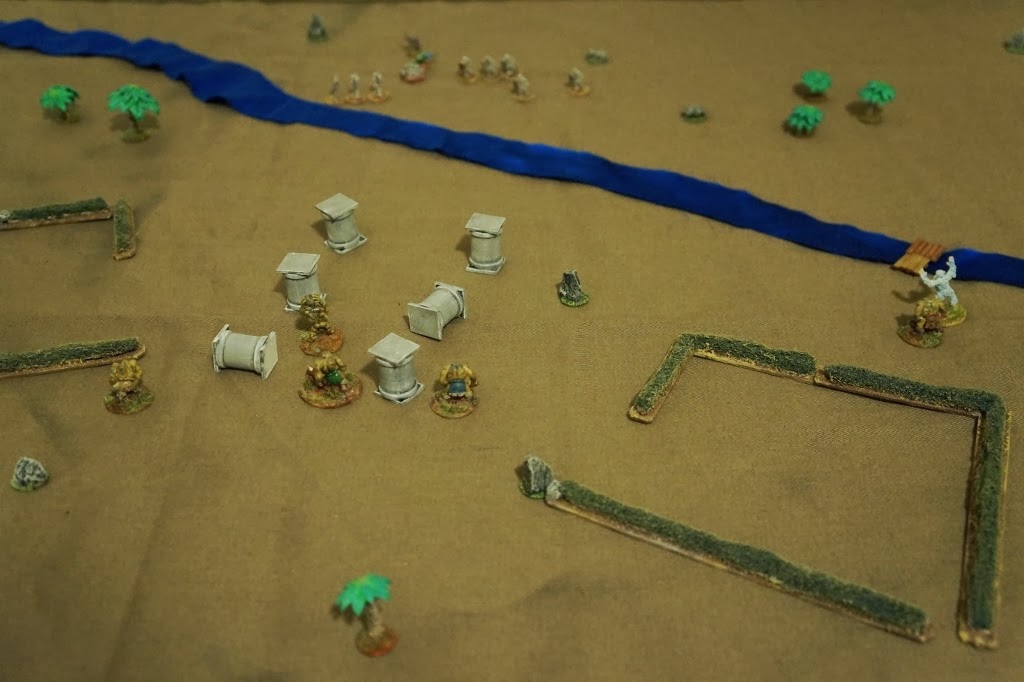 Rushing through the fallen columns of an ancient abandoned temple, lurking behind any available hiding place, the cowardly and thuggish Warchief split off one ogre and the troll to cross the stream at a narrow footbridge (on the right of the photo). 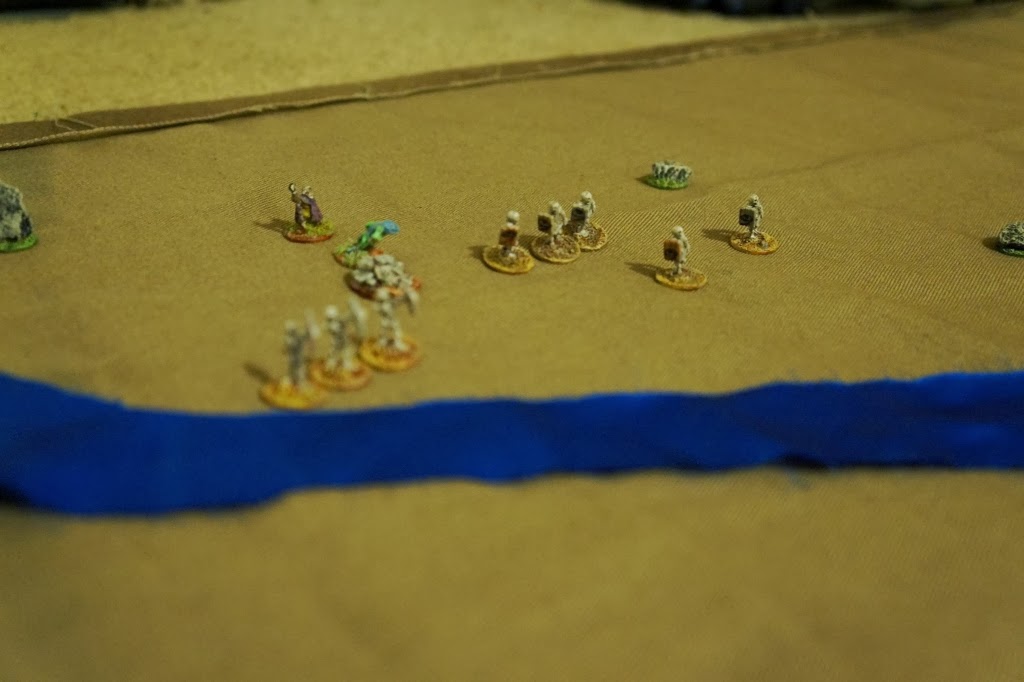 The Necromancer, fearing for the safety of his lizardman employee, chose to split his own forces.  He stationed three shooters to the west and gathered up his five swordsmen to the east. 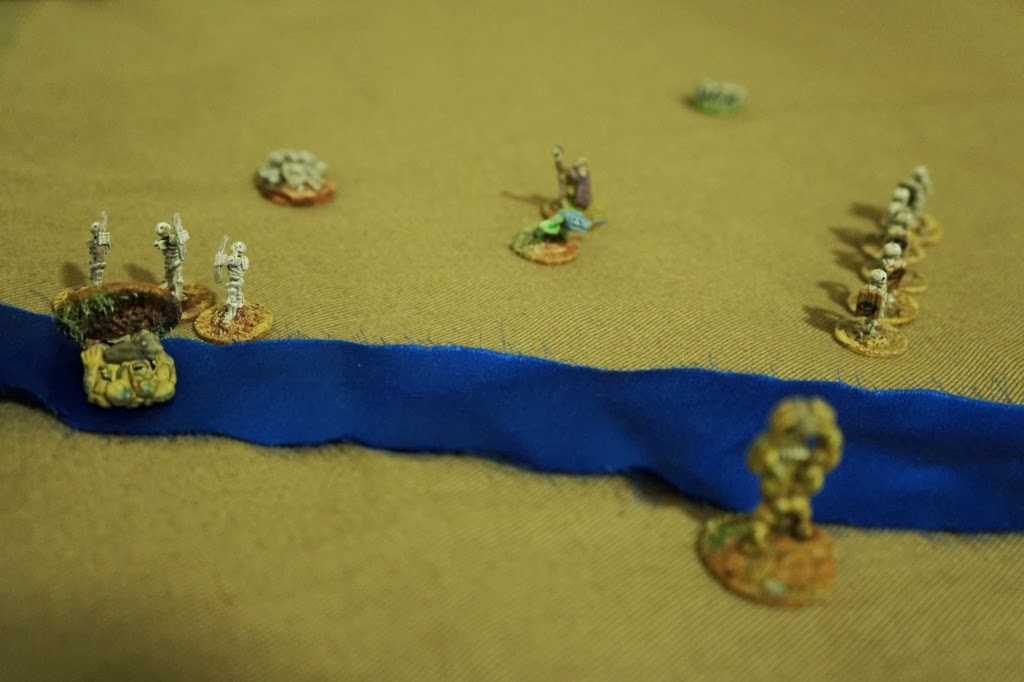 The first of the ogres foolishly charged the shooters on the left, clearly signalling his murderous intent.  The handsome and dashing Necromancer whipped up a bit of sorcery, and transfixed the ogre in place.  The skeleton archers, the weakest fighters in the battle, somehow manage to defend themselves and their beloved boss by knocking their attacker out of the fight.

Meanwhile, to the west, one of the wall-eyed knuckledragging ogres was hurling massive boulders across the stream, to no effect. 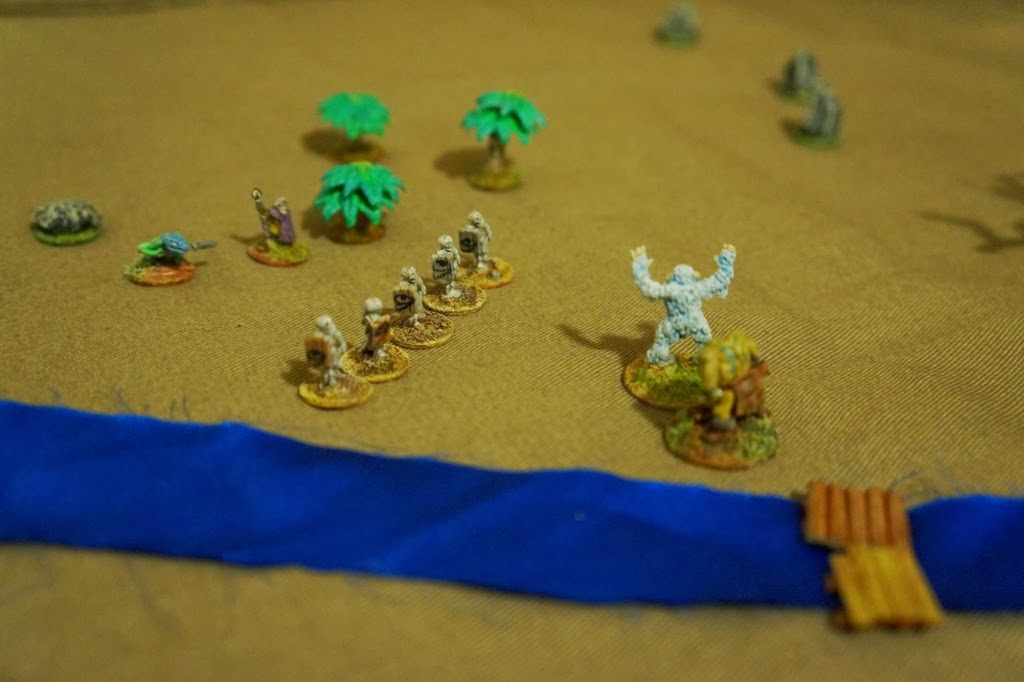 The ogres finally sent their heavy hitter across the bridge and straight into the massed rank of skeletal warriors. 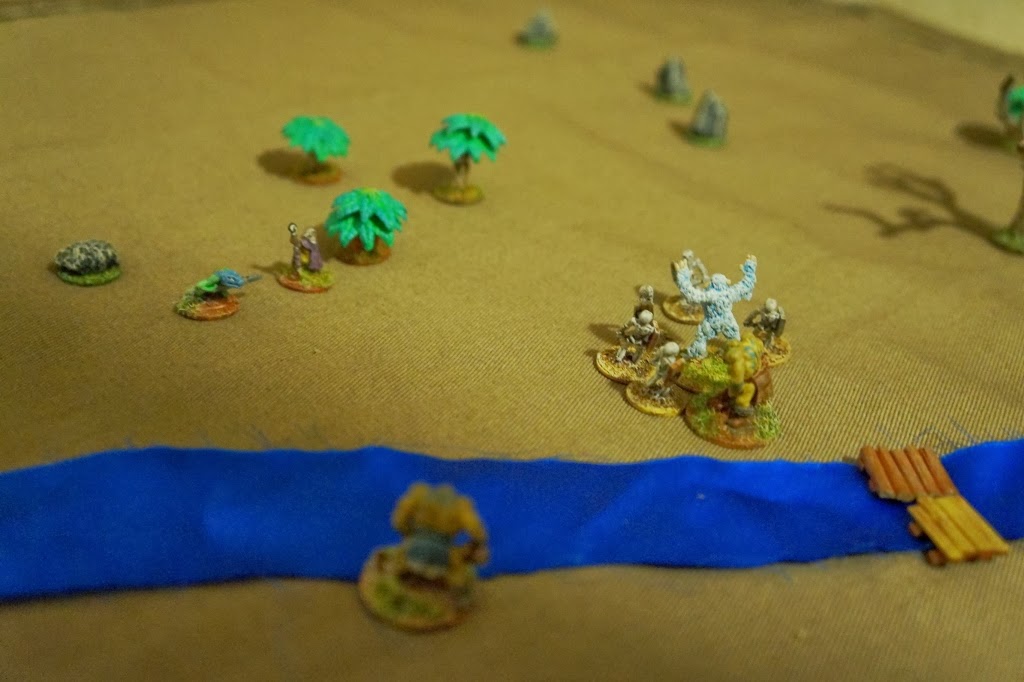 The brave Necromancer met the threat head-on.  His warriors swarmed the Troll, to little effect, until the Necromancer himself tranfixed the savage troll, which allowed his warriors to desperately work together to dispatch the relentless beast.  That feral and probably rabid beast put out of its misery, they turned their attention to the ogre waiting nearby, but disaster struck!  The Necromancer, having spent his spell points healing orphans and saving kittens from high trees, found his reserves depleted – no more could he call upon his ancient arts to protect his poor bony friends from the depredations of the Warchief and his minions.  Alas and alack!
On the eastern front, the archers fought one ogre to a stalemate.  Time was not on the archers’ side, however, as the foul and greedy Warchief slowly picked his way across the bubbling brook.  Adding his considerable (and most likely alcoholic) weight to the fight proved to be too much for the skeletal archers.  At odds of 3:1 they stood a fighting chance, but at 3:2 the outcome was inevitable – two standing ogres and a pile of bones.

With the death of one too many friendly skeletons, the Necromancer encouraged his skeletons to quit the field.  After a brief start, they reconsidered and rushed back to assist their beloved employer, who stands alone to buy them time to escape. 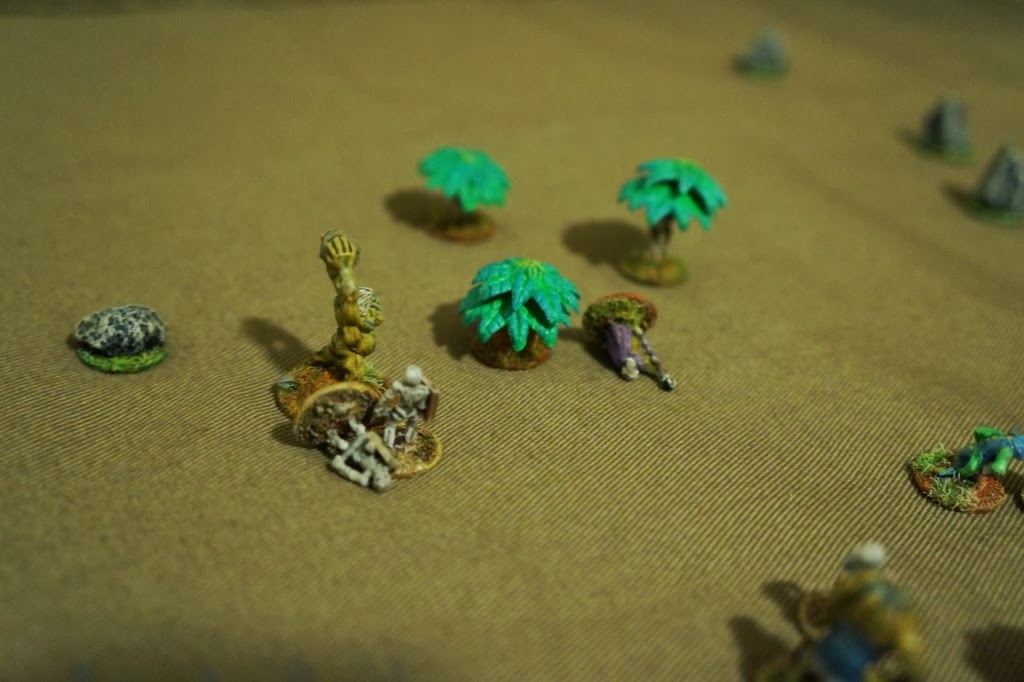 Alas.  The Necromancer’s erstwhile reinforcements arrived too late.  As they reached the fight, the Necromancer was sent spinning through the brush, his poor lifeless body as crushed as his love of all things good and just.  The Warchief celebrated his victory over the innocent and humble Necromancer in the traditional dim-witted way of his kind, by looking for some other poor soul to beat up on.

Aftermath:  So this battle pitted a large force of easily activated weaklings against a larger force of poorly motivated brutes.  The ogre player got off to a rough start, pushing his luck by rolling for two actions.  With 4+ figures, that didn’t work out so well.  His Warchief in particular took himself out of the game completely.  Late in the game, he went with a slower and more methodical approach by throwing just one dice for each ogre.  That way they each got a chance to do something each round rather than risk having that first guy come up snake eyes and wasting a full turn standing around.

The real back-breaker was that triple-failure roll on the Necromancer’s spellcasting early in the fight.  A fallen troll triple-teamed by skeletons still has the advantage in the fight, but a transfixed troll is at their mercy.

For my part, I made the mistake of using my Leader (the wizard) to order the melee skeletons around.  He would have been far more successful ordering the archers to combine fire while shooting energy bolts at a target.  That way even a lost fight wouldn’t have resulted in a casualty.

We’re still learning the ins and outs of this game, but hope next to run a more complicated battle between a small adventuring party and an orcish warband.