The cool kids all seem to be raving about the offerings over at dndclassics.com, especially the Moldvay edition of Basic D&D.  Being the tech savvy luddite that I am, I scored a hard copy of those rules via eBay.

As is the custom, having read these rules cover to cover, allow me a post to point out a couple of  details that had escaped my notice lo these many years.  We’ll skip the big and obvious things – a quick run around the blog-o-scape reveals that I’m not the first – and talk about just three of the many rediscovered wonders in this tight little book.  Others have pointed out quirks like inheritance, cure light wounds negating paralysis, and the variable bonuses for CHA vs. the other five stats.  These are the three things I haven’t seen discussed elsewhere. 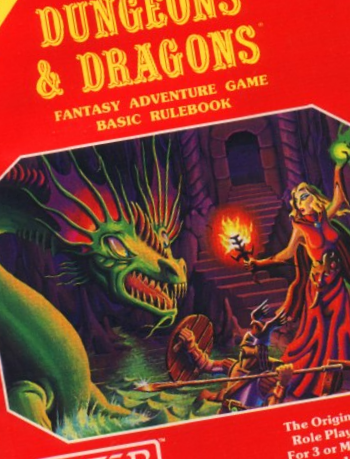 1.  Dwarves as race.  It’s not what you think.  Fans of Basic D&D know there are four races of players (human, halfling, elf, and dwarf), but according to the rules as written, dwarves are also people of color.  Page B9 states, “Their skin is earth-colored and their hair is dark brown, gray, or black.”  The conjures images of the faerie-folk like master craftsman of Norse myth moreso than the Warcraft style stocky vikings with Scottish accents.  It’s not a big deal, but it is yet another indication that early D&D owes less to Tolkien and more to the myths that Tolkien himself drew on.  Speaking of which…

2.  Elves are short.  Again, from page B9, “They are 5 to 5 1/2 feet tall and weigh about 120 pounds.”  These aren’t tall, willowy beings that peer haughtily down their noses at the stumpy humans.  They are elves of the old world – another detail that’s been lost through the decades.

3.  Monsters move really slowly when they aren’t in combat or chasing food (i.e. meddling adventurers).  Let’s look to the movement section where adventurers move at a sedate 120 feet per ten minute turn.  That seems slow, but it accounts for, “mapping carefully*, searching, and trying to be quiet” (page B19).  Monsters are given movement rates on a per turn basis as well (page B29).  Because they also move carefully, map, and search?

Probably not.  This is most likely a hold over from the earliest Gygax days when any player could have a character of any race. The grognards report that ol’ Gary would let folks play level 1 monsters of any stripe, but that the characters started out the lowest HD of that type.  If you wanted to be a vampire, you started as a skeleton, advanced through zombie, and so on until you hit Vampire HD.

I could be wrong, but it makes more sense than the idea that the goblins that ran into the party were mapping the dungeon, searching for traps, and trying to keep quiet. Those bad boys are on their home turf here.

*Incidentally, this line in the book is what leads me to interpret searching for secret doors as an “always on” ability; the first time a party passes by a secret door they have a 1 in 6 chance of noticing it (2 in 6 if a dwarf or elf is with them) even if they don’t state they are specifically looking.  If they state they are doing so, they get a second chance where the player rolls the die.  It makes it a little more likely that doors are found, which is fine by me – secret doors are part of the fun of exploration, and I don’t put them there to not be used.