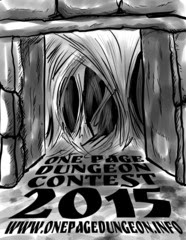 It’s getting to be that time of year again.  Time for the One Page Dungeon Contest.

My entry this year was designed for ease of use at the table.  Most of the relevant backstory didn’t make the final cut.  Maybe it wasn’t so relevant after all.  For those who are curious, more information is presented below the fold.

The Brass Canon’s Plunder by warrenabox

The Legend
The tale of The Brass Canon, pirate captain and terror of the Rainbow Seas, is a ripping good cautionary tale about the fate of all thieves.  A holy man captured by slavers, he turned pirate himself and rose to become the most notorious high-seas brigand of the last century.  Such a nuisance he made of himself, that the Old Empire sent a small fleet to bring him to justice or send him to the bottom of the sea.   The long search finally concluded when the Imperial Fleet found the Captain’s ship, the Godshank, sheltering from a heavy thunderstorm in the lee off a small lighthouse isle.

The captain ran for open sea, but was driven onto the rocks protecting a small cove. A thousand imperial sailors and officers watched as every man pirate fell into the wave-tossed waters and drown. The Brass Canon’s plunder was never recovered.

The Facts
The Brass Canon had already buried his treasure on the island, and intended for the fleet to watch him crash his ship on the rocks and bear witness to the death of he and his men.  The plan was to swim to shore and steal the lighthouse supply caravel.  The Captain didn’t reckon on the high seas, and did indeed perish in the seas along with all but one of his men. A young cabin boy managed to swim to shore and wait out the storm.  He recovered his Captain’s body and buried it in a shallow grave.  Before burying his Captain, the boy cleverly recovered the Captain’s journal from his great coat pocket.

Escaping on the supply caravel by stowing away, the boy grew to an honest man and never managed to return to the scene of the wreck.The journal passed down from father to son to grandson.  After a one hundred year journey, it somehow found its way into the hands of the party…