The built-up areas in Neil Thomas’ One Hour Wargames towns have varying effects on movement depending on the historic era.  For the medieval era, they don’t have any effect at all.  And yet, in the scenarios listed, they often trigger special rules or serve as objective markers.  So from a rules perspective, it makes sense to have a couple stands of “towns”.

Also, they just look cool on the table.  Even if the scenario doesn’t call for it, they make for more visual appeal, which is such a big part of this hobby – regardless of what they tell you at the 40k tables.

For my Big Box of One Hour wargames, I have elected to represent towns as a farm stand.  Not the kind you pass on the road in the country, but a wargame stand featuring a farm.  The field on the right is simple balsa wood walls and painted sand.  The walls are big enough that a full stand of troops can fit inside them.  The row of crops is early in the season and consists of glued and painted sand that should hold up well with repeated wear and tear. 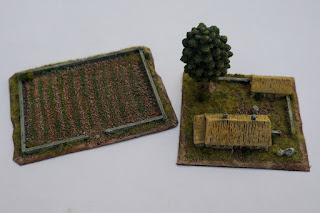 The buildings are from Heroics and Ros’ scenic range.  The small building is listed as SCEN10 (Small Farm House) and the larger one as SCEN12 (Large Farm House).  The balsa wood walls help tie the farm to the field, and the well in the courtyard is a short piece of balsa rod.  The tree is a left over rubber toy from the Tree Toob.  It’s going to tower over the rest of the woodland terrain pieces.  We’ll call it an ancient oak tree and not sweat the difference. 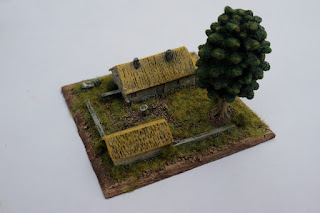 All that’s left to complete the set now are some roads and rivers, and then we can actually sit down and start playing.  Eight months in, and we are still ahead of schedule to complete the big box by the end of the year.  Might even be time to start thinking about the Big Box for 2016.﻿
Making Adventure Fiction Great Again
Subscribe today to be first to hear about my new release, plus receive a copy of a free fantasy novella!
Follow