Neil Thomas’ book, One Hour Wargames, is worth buying for the scenarios if nothing else. It includes 30 different scenarios of all sorts – symmetric, asymmetric, full terrain, open field, delaying actions, you name it.  While they are written specifically for the rest of the rules in the book, they are presented in a format simple enough to use with any mass battle ruleset.  For this campaign, in the manner of our people, we simply rolled a d30 to choose an initial skirmish.

The dice indicated that the first battle fought in the Necromancer War was an assault by the Necromancer King’s forces to secure two strongpoints just inside the Targar Kingdom (Scenario 21 – Twin Objectives).  The first objective consisted of a high hill in the center of the plains and an adjacent fortified farmstead. 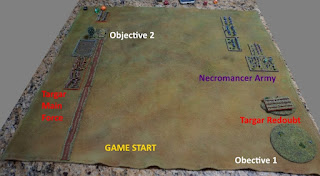 The Necromancer King’s main force arrived en masse.  Alerted by an outpost on the hilltops, the Targars scrambled to put together a delaying force and managed to fortify the outpost with a full unit of heavily armed men-at-arms. Although not caught completely unaware, the Targars could not match the sheer numbers of their undead foes.  (In this scenario the attacker gets 6 units to the defender’s 4, but only wins the game by controlling both objectives by the end of Turn 15.) 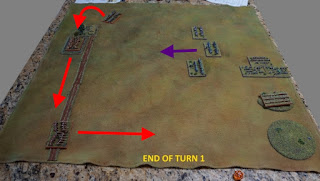 The human slave-knights of the Necromancer King rode forth to assault the farmstead while his foot mounted left wing prepared to take the hills to their left.  For their part, the Targars made move to sweep around to their own left, in the hopes of providing support for the men-at-arms under heavy (but ineffective) bowfire. 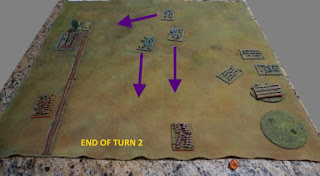 The Necromancer King’s forces would have none of that, and quickly swung to their left to cut off the relief force.  Meanwhile, his animated zombies (read: levies) slowly maneuvered around the hillside looking for a flanking attack.

By the time the foot sloggers finally managed to find the Targar men-at-arm flank, a full line of the Targar First Knights arrived at almost the same time, slamming into their rear and inflicting heavy casualties.  At the same time, the impetuous Targar Second Knights charged the Necromancer’s Thrall Knights on the right. 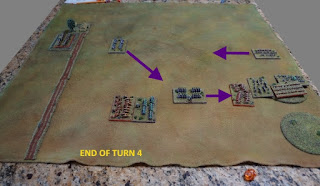 Battle now joined in full, the Necromancer King focused all his might on the exposed Targar First and Second Knights, even managing to charge the already engaged First Knights in their rear. 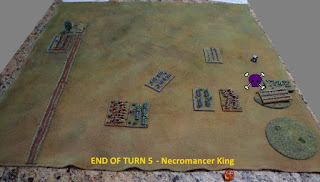 While the men-at-arms successfully dispatched the first of the zombie units, their supporting knights fared poorly out in the open.  The Second Knights, increasingly desperate to connect with the First Knights managed to defeat the undead Thralls in open battle… 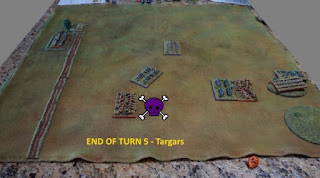 …but were immediately set upon by a second unit of thrall knights. 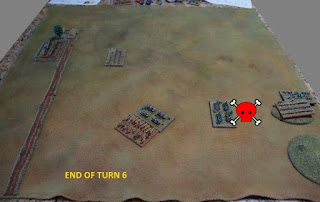 Grossly outnumbered an exhausted from their just completed fight, the Targar Second’s defeat was inevitable.  The loss of a second zombie unit at the hands of the men-at-arms was minor comfort as zombies are much more replaceable than the cream of the Targar nobility. 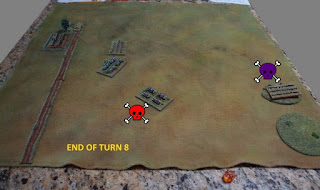 Down to just the Targar Third Knights in the farmstead and the men-at-arms holding the hill, the day’s battle favored the Targars.  They had successfully held out until mid-day, still maintained control of both strongpoints, and had depleted their foe’s strength by half.  At this rate, the Targar general, High Lord Sisterbanger, could almost feel the weight of a new medal of heroism hanging from his chest. Even the massing forces of the Necromancer King headed his way couldn’t dim his spirits… 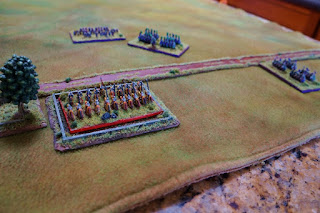 …and that’s when disaster struck.  His cousin, The Duke of Incessuaria, had long resented being given command of the less prestigious redoubt – a true and glorious nobleman should ride to battle in style.  Not to be outdone by his cousin, the Duke immediately quit the hillside to march to High Lord Sisterbanger’s “rescue”. 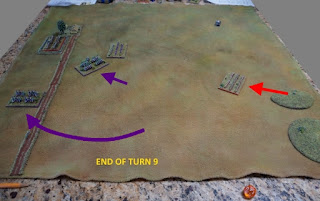 Quickly sensing a way to recover the initiative in the fight, the Necromancer’s General ordered the archers to serve as a screening force… 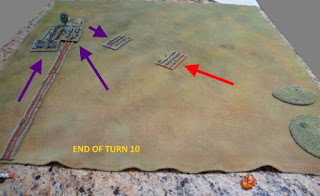 …while his knights secured the farmstead.  The Duke of Incessauria contacted the screening force of archers to no avail. 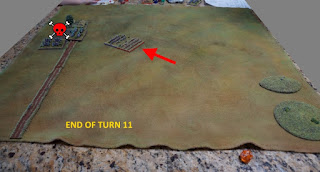 Although the skeletal archers would quickly wilt before the blades of the Duke, they survived long enough to leave him exposed and alone on the battlefield.  Too late, the Duke of Incessuaria realized his mistake. 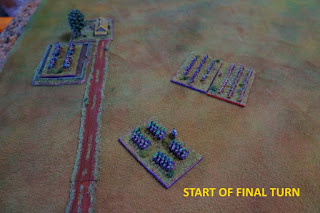 His men finished off the archers before them with no time left to shift and face the onrushing Thrall Knights of the Necromancer King.  The Knights impacted the Targar exposed flank and wiped them out almost to a man. 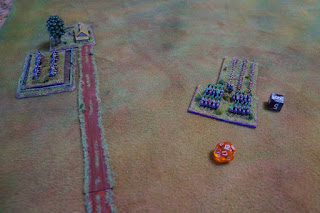 If only the Duke had stayed put, per his clear and simple orders, his force of heavy infantry (half damage due to armor) could have weathered many a charge safe on the hill (another half damage due to the fortifications) until sunset forced an end to the fight.  The hills were a good two turns away from the farmstead, which would have meant holding out for just two more turns – easy enough when your foe cannot flank you and can only do one or two points of damage each turn.
Instead, the way was opened for the full might of the Necromancer King’s forces to drive deep into the heartland of the Targar Kingdom.  As a result of the win, the Necromancer will get to choose which side of the next randomly determined scenario he wants to play.
Making Adventure Fiction Great Again
Subscribe today to be first to hear about my new release, plus receive a copy of a free fantasy novella!
Follow