The completion of the latest big box presents a first chance at playing Neil Thomas’ One Hour Wargames the right way – fully based and painted figures, full color terrain, and every option in the book available to both players.  To kick things off, and help us stay motivated to play more battles, the boy and I decided to play a five fight narrative campaign using a random assortment of scenarios from the rulebook.

To remind those of you following along at home, we have to matched forces built to spec.  In the left corner,wearing the green and purple, and flying banners bearing a flaming eyed goat’s head, are the forces of  the vile and demonic Necromancer King. 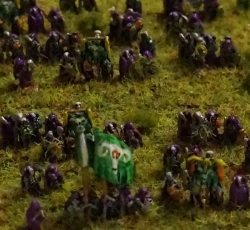 In the other corner, wearing red and gold and flying banners bearing theme and variation on the dragon head motif, are the knights, nobles, and freemen of the peace loving Targar Kingdom. 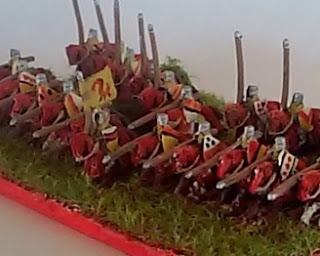 Guess which force your humble narrator controls.  Yeah, this is not going to be a terribly fair and biased history of the as-yet-unfolded Necromancer War.

First we diced off to decide who would be the aggressor and who the defender.  He won the toss and elected to invade the Kingdom of the Targars.  So there you have it – pick your forces, roll off for attacker, and you’re ready for a campaign.  Easy peasey.

Next Time:  The Necromancer King Attacks!