Apparently I’m not the only one having a hard time wrapping his head around a couple of quirks of the Black Ops system.  Over on the Lead Adventure Forums asked a question that had bothered me on my first reading as well. 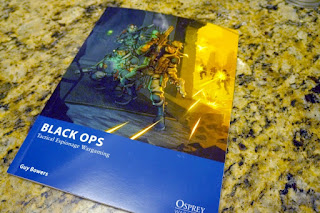 In Black Ops your model stats are target numbers, and all modifiers are written as modifiers to the target number, not to the die roll.  So instead of needing a 4+ to hit your target and subtracting one from the roll if the target is in cover, you add one to the target number.  These are just two different ways of saying the same thing, and long term gamers should have no trouble converting on the fly.  For you D&D types out there it directly translates to the ascending vs. descending AC situation.  It’s really not a big deal…

There were two moments in my first read-through that gave me pause.  In both cases, I couldn’t wrap my head around the fact that a Tough roll was easier (4+) to make than a Normal roll (5+).  In both cases, the problem stems from confusion about the face that the word “Tough” modifies the model, not the roll.

When it comes to observation rolls, it is the defender that rolls the die.  When the model makes himself Tough to notice (i.e. by using smoke, poor lighting, or cover) the target number goes down. I read that thinking, “Wait, the Tough observation (4+) is easier than the Normal observation (5+)?”  To which the response was, “Yes, the model has made it harder to be observed, so he needs to roll against a lower number.”

The same thing applies when it comes to wound saves, the defender rolls the die.  In this case, the term that appears in the modifiers table is also Tough, but again that word modifies the model itself and not the roll.  A model that is Tough will have an easier time surviving a wound (4+) than a model who is not (5+).

It is really easy when you think about it that way.  You just have to shift your perspective a little bit to get your head around it.