In the southern corner, a dozen conscripts working for Hazmat Security, Inc.

Since this was just a trial run, we opted for an asymmetric, stand-up fight between a small special force of four, and a dozen conscripts.  Nothing fancy, just two 50 point forces, line ’em up, and shoot.  The battle wound up being a Special Forces defense of the lone two-story building on the table. 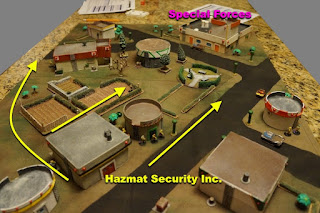 Here you can see the crew-women behind solid cover.  The white bead marks a model holding her action.  It’s a bit like overwatch, except that the model can move instead of shoot, and the model can also piggy-back along with a model within 3-inches that moves.

Remember that Black Ops uses a card activation system, so this allows models (like an ace or a heavy) to wait until a squad of mooks is activated, then they can all move on the same activation card.  That’s important, because when a squad is being shot at, the dice get applied equally to all the models in the squad, with any leftover dice being allocated by the defender.  So your mooks can act as limited meat shields.  Two very simple ideas, but hoo-boy do they open up some serious tactical choices.

The crew of the Myconis hunkered down, and tried to make good use of suppressing fire to corral the Security forces in to a decent kill-zone, but it didn’t work out so well.

Here you can see three suppression markers pinning down two mooks and a heavy. In Black Ops you can aim suppressing fire at a model or a location. If you hit a location, then any model within 3-inches, or that moves to within 3-inches of a marker takes the hits. We weren’t sure why you would ever target one model, when you can target an area and affect multiple models. I need to think about this and read the rules a little more carefully.

In this case, the squad shown above just ran back around the other side of the building rather than get exposed to the suppressing fire.

The batch of forces above was able to throw down eight dice by shooting against the Myconis’ ace and heavy, for a total of one hit on each model. No problem-o – both were wearing body armor, so they would survive a wound check on anything but a one.

That ended the game sooner than anticipated. For the crew of the Myconis, the activations didn’t go their way, the dice didn’t cooperate, and they just didn’t have enough models to gain any sort of initiative in the fight.  In this case quantity defeated quality.

No big deal. We were able to take the rules for a test run, and they are fun. They are fairly simple, easy to understand, and have only a limited number of modifiers to remember on each roll. The way each of the systems interacts, though…we need to play a few more games to make truly informed tactical choices. Next time we will probably go with rosters that are more even in number and quality. This time out there were just too many variables in play, so our tactics were more of the, “let’s see what happens if I do this” variety.