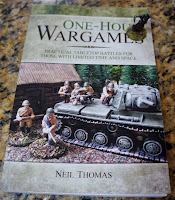 With multiple games of Neil Thomas’ One Hour Wargames under the belt, it’s time to take a more solid look at the ruleset and see how it stacks up.

What makes for a good tabletop game?  Enough units to have meaningful choices.  Enough variety to make each fight unique.  Enough balance that each game has the potential to come down to the wire with victory often decided in the final turn.  The medieval version of OHW passes all three tests.

In any given game, players are limited to three, four, or six stands of units on the table.  Compare that to a game like Warhammer Historical where you can have hundreds of figures on the table…generally organized into three to six independent maneuver units.  Or most space combat games where you have a half a dozen or so ships to control.  Or the DBx family of rulesets where your 12-ish stands are typically groups up into six-ish actual units.  In fact, a good many of the best games limit your maneuver units to somewhere around six.  It’s a good round number that leaves you with enough options to implement any number of strategies.  It is also a small enough number to avoid falling into the sort of analysis-paralysis trap that you see in more complex games like Warmahordes or tabletop Infiniti

Looking back it is clear than in each battle one tactical decision, usually somewhere around the mid-point of the game, proved to be the critical turning point.  The last few turns of each game consisted of running through the steps of the turn to see how that tactical choice played out.  That’s another good sign about these rules – your choices have real long term and clear consequences.

You lose a bit of the presentation aspect of the game when the status of your unit is artificially marked on paper or with dice or counters, rather than through the expedient of figure removal.  That can be mitigated by spending more time on each stand of figures and placing a lot more figures on each stand. 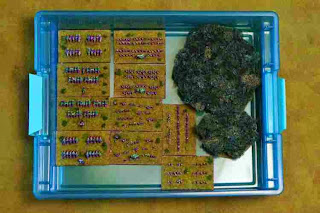 Admittedly, the game seems to suffer from limited troop selection.  Your army consists of just 10 units, with only three to six of those units taking the field at any given time.  This is actually helped by the fact that you have little control over who actually shows up to the battle.  For every battle you will be limited to one of six possible army lists, and your opponent the same.  That gives a potential for 36 different matched sets of armies.  Multiply that by the 30 different scenarios in the rule book, and you’re talking a total of 10,600 different potential battles.  It’s going to take a few years to get through that many battles.

Granted, for most games the variety is limitless.  There are surely an infinite number of games that could be played of games like 40K or Flames of War, but really, once you get past the first 1,000 or so variations on a ruleset, does that make a big difference?  If I play 20 games of OHW, no two the same, then I’ll consider the rules money well spent.

Balance is a tricky beast to measure in wargames.  In the three games that I’ve played so far, all three have been decided on the last turn of the game.  A couple of die rolls one way or the other could have altered the outcome, which was in doubt through the end of the game.  In each case it became clear as we reached the finish line which side was in the driver’s seat, and which one was praying for a miracle, but in each case that miracle was possible.

So is this a good ruleset?  Yeah, it is a solid light ruleset that provides everything you could ask for in a wargame without asking a whole lot in return.  You don’t need massive armies, you don’t need a half a day to set up, play, and tear down.  You don’t need to remember dozens of clauses and counter-clauses or spend long minutes thumbing through legalese to get an answer to a rules conundrum.  All you get is a solid hour of tactics, dice, and pushing little figures around to their glorious tabletop doom.  And that’s enough for me.