Last time we looked at a few ways that smart people approach the challenge of cramming as much terrain into a small space as possible.  This time let’s look at how a dumb person does it.  And by dumb person, I mean me.

In addition to cramming as much terrain as possible into a single small box, I also wanted to incorporate something that all of the last post’s featured bloggers did not – the third dimension.  I want some height.  Both for visual appeal and for added gaming possibilities.  I want snipers and ladders, and ways to go over terrain and not just around it. 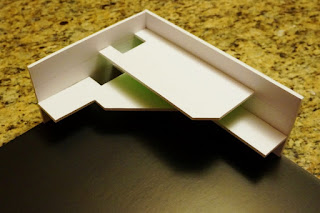 My first attempt consisted of constructing two L-shaped buildings three floors in height.  These could be packed in to the big box side by side giving me two large end-pieces for a gray drop cloth.  Add some stairs, and a bunch of shopping kiosks, and you’ve got a nice little starport. 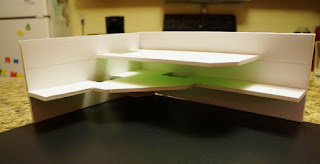 You put one of these in each corner, or even adjacent to each other, and  now you’re talking.  The downside to this plan is that my fat fingers can’t fumble back into the back corner.  With only six inches of head space, each floor is only two inches high.  You can get away with narrow corridors, but a full balcony just won’t work well in practice.

Also, I mis-measured my pieces, and couldn’t fit them both in the box at the same time.

Cut that down by a couple of inches to make them square?  Bah!  Too much work for too little reward.  Besides, they would fill the box.  By the time the stairs and a couple kiosks are done, all I’d be left with is some small scatter terrain.

Next, I experimented with large one-story tiles, to see if there was a way to pack eight tiles with walls into the box.  There was a way to nest them resulting in a battlefield the size of 8 sheets of paper, but everything wound up really short and crammed into the box in a way that was guaranteed to damage the terrain.  There was still no room left for any sort of scatter-terrain.

Perhaps it was time for something really different?  Next time we’ll look at a more Escher-esque attempt at the small box…