There are basically two ways to build wargame interiors.  You can place freestanding walls on a ground surface (aka “the maze”), or you can integrate them into the ground surface (aka “tiling”). There is a third way, a hybrid method with tiles that represent rooms and corridors.  Let’s look at each in turn.

The maze gives you a lot of flexibility at the cost of visual appeal.  The walls are left generic so that they can represent anything; any specific feature that draws attention to the purpose of the room limits your flexibility.  Furniture scatter terrain serves that purpose.  A stove marks the galley, a bed marks the bunk, and a command chair marks the bridge.  A standard assumption of the maze is that the perimeter of the drop cloth actually represents invisible walls.

In practice, there is little to distinguish the maze from an outdoor setup.  You’ve got a rectangular battlefield with large terrain pieces scattered about that influence your decision making process.  The terrain may be linear walls instead of blobby buildings and woods, but you’re still playing on a plane surface broken by impassable terrain.

Tiling gives you the ability to designate spaces by purpose.  Now, in addition to the stove, you’ve got a menu and cabinets line the walls, and the command chair faces large viewing portholes.  You get a much more appealing look at the cost of flexibility.  You also gain fully visible exterior walls, further marking the gamable space as firmly “inside”.

A tiled battlefield feels very different from the maze.  It’s more claustrophobic as everywhere you turn, there’s another wall.  You wind up thinking more in line with real world interiors (“Better send three guys through the garage bay to flank them through that dining hall.”) than you do with a maze.  The game play might be similar, but having real world features helps turn things from a gladiator arena to a living space.  It changes both the aesthetic and the game play.

So if you’re looking for an actual interior, it’s well worth it to create actual tiles.  Which would bring us back to my new box set, but before we do that, let’s look at a couple of cool hybrid strategies implemented by other bloggers.

Spacejacker built a blank tile set with themed scatter terrain.  It’s an elegant solution which allows for a lot of flexibility, while capturing the interior feel. 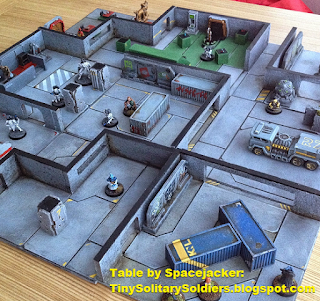 Delta Vector’s solution was to build individual rooms, but place them on top of a drop cloth.  Those corridors still look and feel like an interior, but he can personalize each room.  Plus, gains the stackability of the rooms, allowing him to pack more terrain into a smaller box.  Again, a very clever technique. 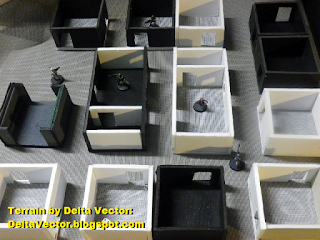 Stalker7 built a maze on top of tiles.

There are a lot more clever ideas out there, but that gives you some idea for how smart people approach this situation.  Next time we’ll look at how a dumb person does it.