There’s no way around it – big multi-layer pieces of terrain just aren’t going to fit into a small box. So let’s just stick with a one level floor plan. Everybody and his uncle uses some variation of rectangular or hex-based tiles for their terrain.  But since this is sci-fi, and we’re building space-stations and spaceports and such, we should look for something a little more scientific.  So how about a nice repeating pentagon pattern?

These mock-ups of tiles are based on a repeating regular polygon pattern called a Cairo Tessellation. The pentagon has four equal sides and a fifth, longer side.  Two of the angles are right angles, so you could combine this pattern with square tiles to get some very interesting results. 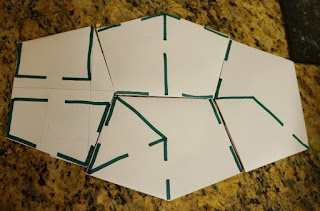 The green lines are an experiment in wall placement.  If you put doorways at the center of each side, then you can be assured that everything lines up.  Leave one or two sidewalls completely open and you can easily build large chambers, too. 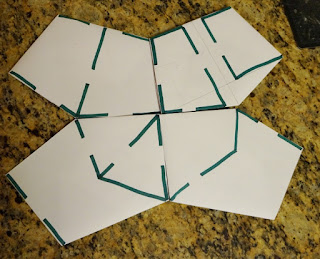 I abandoned this idea when it became obvious that you’re going to have to sacrifice too much  gameable space in the box.  Remember that my box limits me to roughly three stories worth of tiles, and I’d only get three large or six small tiles total.  That’s just not enough to satisfy me.  I could stack them on their sides and fit seven or eight, but each one would be even smaller than the ones shown here.  That still leaves a lot to be desired. 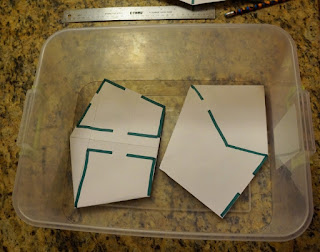 Tune in tomorrow for the thrilling conclusion and solution to the Small Box Blues!