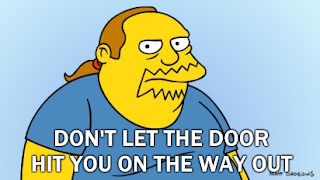 It’s never too early to start looking forward to the end of the Obama reign. As that blessed day draws near, let’s take a look at what his ex-Presidency holds in store for the world. Traditionally, out of respect for the newly inaugurated President, history, and the American people, ex-presidents shut up and get out of the way. On those rare occasions that an ex-President does come out of the shadows to make a public appearance or to give a speech for donations to a “foundation” (heh), they generally stay out of the public political fracas of the time. When on those even more rare occasions that they do get involved, the press has generally rolled their eyes and lent very little credence to it.

That is a generalization, of course. Reasonably justifiable exceptions occur. Bill Clinton campaigning for his wife serves as a timely example.

For a host of reasons, this makes sense. It helps to maintain the peaceful transfer of power that plays such an important role in the smooth functioning of the nation. It reinforces the trust between the populace and the government they serve. It’s a way for an ex-President to signal recognition that his time on the stage is over, and that the responsibility for rule now falls on the shoulders of another man. There are more, but you get the idea.

Does anyone really expect President Obama to pull a slow fade?

The narcissism he has displayed throughout his Presidency provides countless clues to his behavior post-rule. Surely the weight of tradition, the importance of a transition of power, and the smooth functioning of the FedGov are vastly outweighed by Obama’s supreme intellect and the world’s need for his gentle command. He may have to turn most of the reins of power over to President Trump, but it’s a safe bet that he clings to the powers of the bully pulpit with a death grip.

Does anyone really expect the press to call him out on it?

The media has called out former presidents Carter and Bush the Elder for shooting off their mouth about policy set by current Presidents, but after eight years applauding Obama for breaking tradition, it’s hard to believe they would grow a spine and call him out for breaking with tradition. Even if they wanted to, any desire to criticize ex-President Obama would have to break past that tiny voice in their belly whispering the R-word into their psyches.

More to the point, the election of Trump marks a sea change in that for once the transition won’t be from one wing of the uniparty to the other.  The tradition only holds because for decades the transition from Red to Blue has marked a change in direction for the ship of state of mere degrees.  The uniparty expects President Trump to grab the wheel and give it a good solid spin.  There’s less incentive than ever for an ex-President to behave himself, secure in the knowledge that his legacy is safely ensconsed in the policies of his replacment. Especially when that President’s policy rests on ground as shaky as Obama’s.

Of all the ex-Presidents, Obama’s legacy has been built on the sandy beach of executive orders and executive branch seat fillers.  A President Trump can wipe out the vast bulk of Obama’s legacy with the right Cabinet appointees and a few sweeps of a pen.  The normal process of writing history while the ex-President is still around to reward his water carriers in academia is going to have work overtime to get that first pass written as fast as possible, and they’ll need all the help they can get.  Which is where Obama’s attempts to cling to the spotlight will be directed – establish all the good of his term that is being summarily strangled in the cradle by a successor too stupid to wait the five years until Obama’s policies could really take effect. Or 10 years.  Or 20.  It’s like global warming – it’ll happen if we just waited long enough.

All that bluster will be great fun to watch. More grist for the meme mill. You won’t see any jokes about this from Saturday Night Live or The Daily Show, but these days all the best humor comes burbling up from the dank corners of the internet anyway. That’s one thing that isn’t likely to change for a few years yet.