The handmaidens of globalism really have no idea what to make of effective counterpunchers.

A recent sperging from the HuffPo sputters that Some Donald Trump Supporters Are Now Calling Him ‘God Emperor’.  (That link is to an archive, so you can click without fear of granting the execrable HuffPo or their advertisers any links.)  Note that many of us on the alt-right have been using that team of endearment for our Orange Savior for months now, but the ever alert Nico Pitney just uncovered this amazing scoop and couldn’t wait to spread the word to his people.

Nico just doesn’t get it.  The world has passed him by as surely as it has the stodgiest Carroll O’Connor throwback.  Anyone old enough to get that All in the Family reference, let alone make it, it surely on the wrong side of cool, and yet is still light years cooler than Nico.

This is a man who has sold his soul to the influence peddlers of days gone by, the national news, entertainment, and political masters.  He still operates under the delusion that culture is a top-down affair and that organizations such as his sit near the top of the pyramid.  His word should be disseminated, and those Trump supporters should only ever be entertained by messages from their betters.

His world is dying, and he just can’t see it.

These days Trump supporters don’t need the likes of Nico or Paul Feig or Sarah Silverman to tell them what’s cool and what’s not – they make their own fun.

I mean, look at this: 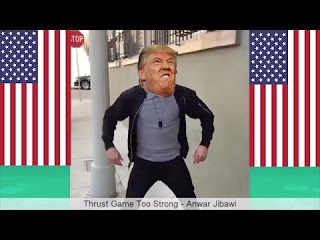 One image from a YouTube video makes you laugh harder than all of Silverman’s jokes combined.

Or consider this little quip:

Editor’s note: Donald Trump regularly incites political violence and is a serial liar, rampant xenophobe, racist, misogynist and birther who has repeatedly pledged to ban all Muslims ― 1.6 billion members of an entire religion ― from entering the U.S.

Okay, that last bit is actually a straight-faced bit from the HuffPo editor, and wasn’t meant as a joke, but you can’t help but laugh at the ineffectiveness of that sort of virtue signaling.

The really sad thing about guys like Nico is not that they don’t see reality, but that they see it, consider it, and then reject it outright:

Some forum members say “God Emperor” is simply a tongue-in-cheek attempt to rile up Trump opponents who fear he would be a strongman as president.

Yes, Nico, that’s exactly the trap they’ve laid out for you.  You read the blueprint, laid out the trap, and then blundered into it yourself.  If you had any self-awareness at all, you’d understand that the joke isn’t on you, you are the joke.